UFC Fights are Unlike Any Other Fights in the World 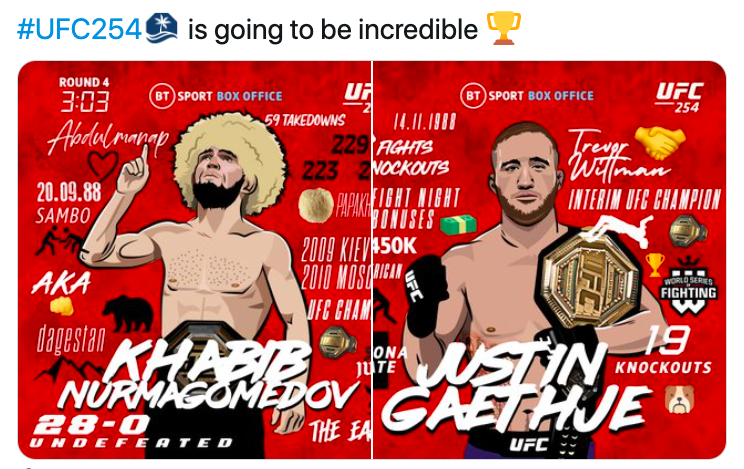 I started watching UFC fights about a year and a half ago. I got hooked because these matches are like no other sport. This is the only place where real fighting happens. Punches, kicks, wrestling moves, any kind of martial art is allowed in the ring. There are UFC fights pretty much every week. The best fights are on PPV; about once a month. They try to get the best fighters all on one ticket.

UFC 253 was the most anticipated pay per view event of the year. Adesanya and Costa were supposed to fight a while ago. The match up was delayed due to COVID-19. They trash talked each other a lot because of the delay, making this event even more anticipated. Adesanya has been undefeated for so long, so I kind of wanted Costa to win. I normally root for the underdog unless I am a big fan of the fighter. The main event was a short fight, and not worth the money; Israel Adesanya vs Paulo Costa for the MiddleWeight championship. Israel Adesanya won the fight 3 minutes and 59 seconds into the 2nd round with a Total Knockout; it was his 100th professional win through all combat sports. It was also his 8th straight win in the UFC, making him undefeated in the sport. He is 20-0 in Mixed Martial Arts altogether. He won by constantly giving leg kicks to Costa’s right leg, and after the first round Costa could barely even use his right leg. Then, Adesanya just picked him apart and knocked him out shortly after.

The Light HeavyWeight championship fight was worth the watch. Jan Blachowicz vs. Dominic Reyes. Blachovicz was a strong underdog in this fight. He won 4 minutes and 36 seconds into the 2nd round by knockout. He is the first male Polish champion in the UFC ever. No one thought he stood a chance against Reyes. Reyes was a tremendous opponent, but the power in Blachowicz’s punches were just too much. There were nine other fights before the two title matches on September 26th. Look at the fight cards HERE.

The next big UFC event is Saturday, October 24th. This one is huge. Khabib Nurmagomedov is so popular. He is the 2nd most popular UFC fighter right now, behind Conor McGregor. This Russian fight is 28-0. He just demolishes his opponents. UFC fans think American fighter Justin Gaethje has a good chance to finally beat Khabib. All I know is on 10/24, one of these men will leave the Octagon as the undisputed king of the UFC lightweight division.