America Reckons with Violent Uprising at Capitol on Wednesday 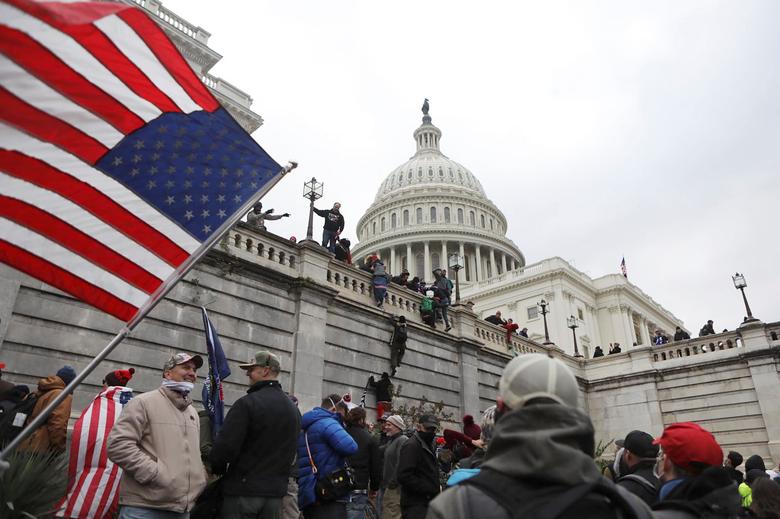 Photo by REUTERS/Jim Urquhart and found at reuters.com

Supporters of President Trump scale the walls of the Capitol Building, January 6.

Yesterday, a mob of White Supremacists loyal to President Trump took over the US Capitol Building for four hours. These domestic terrorists stormed the capitol in a calculated attack as a joint session of Congress was being held to certify the results of the Electoral College votes for the next president. After the domestic terrorists were forcibly removed, and the Capitol building was secure, House and Senate members continued proceedings to tally President-elect Joe Biden’s Electoral College victory and later certified those results early Thursday morning according to NPR.com.

According to NBCWashington.com, “barricades were set up on the plaza in front of the building, but police retreated from the line and a mob of people broke through. Lawmakers, at first unaware of the security breach, continued their debate. Soon they were cowering under chairs. Eventually they were escorted from the House and Senate. Journalists were left alone in rooms for hours as the mob attempted to break into barricaded rooms.”

There are many questions that need answers. Why did the rioters make it into the Capitol building? Where was the militant force that shot rubber bullets and tear gas at peaceful protestors this summer in DC? Why wasn’t that same force seen yesterday to stop a domestic threat to our government officials in a secure government building? U.S. Capitol Police Chief Steven Sund said late Thursday morning that his officers “responded valiantly” and were attacked with metal pipes, chemical irritants and other weapons. It is not clear how many officers were on-duty Wednesday, but the complex is policed by a total of 2,300 officers for 16 acres of ground who protect the 435 House representatives, 100 U.S. senators and their staff.

Video and pictures show these white Trump supporters taking pictures with statues, posing with podiums, putting their feet up on desks, and walking the confederate flag down the halls of the Capitol building. The acting U.S. attorney in the District of Columbia, Michael Sherwin, had no answer for one of the biggest questions about the domestic terrorists who took control of the Capitol building on Wednesday; “I can’t answer why those people weren’t zip-tied as they were leaving the building by the Capitol Police.” 68 people in total have been arrested since the riot yesterday.

According to NBCnews.com, “not long before the mob descended on the Capitol, Trump told protesters at a rally near the White House that ‘we’re going to have to fight much harder.’…Trump has repeatedly and baselessly claimed that the election was stolen or that there was widespread fraud, for which there has been no evidence.” Just minutes after Congress confirmed Biden and Harris’ election win, President Donald Trump finally committed to an “orderly transition” of power.

Washington D.C. will be under a state of emergency until 3 p.m. on Jan. 21, the day after Biden’s inauguration, as a response to the riot. A seven-foot-tall fence that cannot be scaled has been put up around the Capitol grounds.

Stay informed, warriors. Follow reliable news sources for information. A local news reporter that is always on the scene and is always non-biased is Shomari Stone. He has an active Twitter account. (You don’t need to have a twitter account to see his articles.)