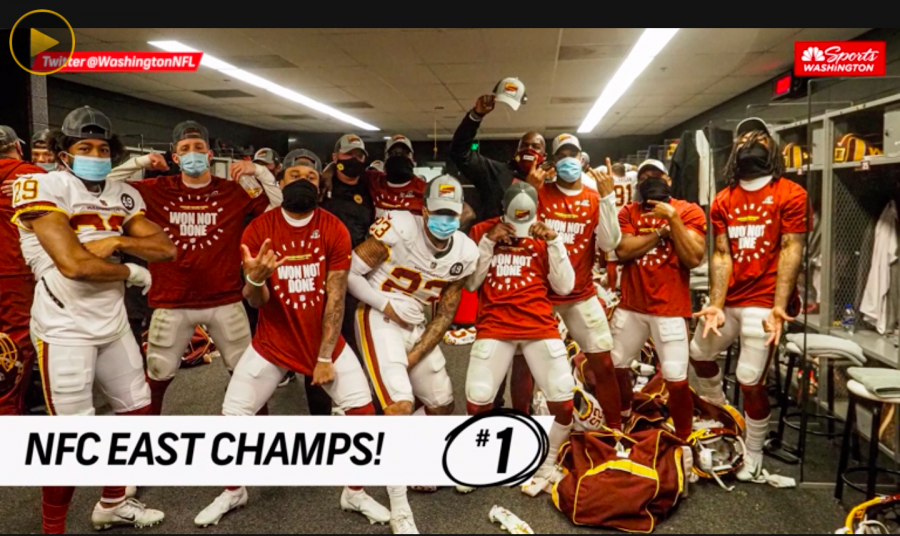 It can’t be said enough that the coronavirus has made it a tough season for all of the football teams in the league. But from the terrible announcement that the new head coach, Ron Rivera has cancer to major quarterback switches through out the season, even on Wild Card Game Day, it seems like the Washington Football Team has had to overcome a lot of hurdles. Even with all they have had to go through, they have still managed to make it to the playoffs. They also earned the title of NFC East Champions for the first time in five years last Sunday, and did it with a losing record, 7-9 for the season.

They are lucky. We will see if that luck runs out today.

But first, let’s look at the journey this team has taken this season.

Earl in 2020, Ron Rivera was fired from the Carolina Panthers after a disappointing game against the Redsk*ns. On January 1st 2020, Washington quickly picked him up. Little did he know the challenges that 2020 would ring him. Ron Rivera had to try to coach a completely new and young team, but he would also have to deal with a cancer diagnosis. According to the Washington Post, Ron Rivera was first diagnosed with squamous cell cancer in August and would still coach the team. For more than half of the games this season he has had to receive IV treatment at half time. Even with all this going on, he has given the Washington Football Team a shot in the playoffs.

On July 13th, 2020 the Washington Redsk*ns announced they had changed their name to the Washington Football Team. The team changed their name because it is a racist slur towards Native Americans. The team had so many discussions and choices: The Warriors, The Red Wolves,  The Redhawks, The Red Hogs (The nickname of the Redsk*ns offensive linemen during the early 1990s), and The Red Tails (WWII Tuskegee Airmen, who were the first African-American military aviators in the U.S. Armed Forces) were the most popular. After many votes were cast, the temporary name of the Washington Football Team (WFT) was chosen.

The Return of Alex Smith

Alex Smith’s story is nothing short of a miracle. It all began a little over two years ago, during the third quarter of the Texans vs Redsk*ns game when Alex Smith was sacked and suffered a compound fracture in his right leg. He soon caught a flesh eating bacteria, and that along with his broken leg, took 17 surgeries to fix. Not only did he almost lose his leg, he could have lost his life. After all that, nobody thought Alex Smith even had a shot to play another NFL game. Smith surprised everybody when it was announced he had made the 53 man roster, and fans were even more surprised when previous QB Kyle Allen went down with an injury and the WFT put Smith in after 2 years of waiting. He has continued to start and was instrumental in giving Washington a shot at the playoffs. Sadly, it was announced earlier today that he will not start in the Wild Card game tonight vs. Tampa Bay. Alex Smith is inactive and Taylor Heinicke will start at QB.

This year, Washington has started a total of 4 quarterbacks (if you include today). They started the season off with Dwayne Haskins. Many thought he was the answer, but after a disappointing game against the Ravens, the Washington Football Team not only moved him down to a backup, but all the way to third string behind Kyle Allen and Alex Smith. Kyle Allen first began the game against the Giants as the starter, but later dislocated his ankle ending his season. Alex Smith then became starting QB. He continued to start for Washington until he was injured once again in a game against the 49ers. Dwayne Haskins played the next two games against the Seahawks and Panthers in back to back loses. Then, no one could have seen it, but Haskins was released for Covid violations. This second year quarterback was released on Monday,December 28th. According to CNN.com, Dwayne Haskins said he took, “full responsibility for not meeting the standards of an NFL QB & will become a better man & player because of this experience.” Smith played injured in the final game of the season vs. the Eagles. WFT’s 20-14 win won them NFC East Champions for the first time in 5 years. The chaos does not look like it is going to end with Smith on th injury list today.

Ahead of today’s game, let’s look at the key players for this game. Starting off with the rookie defensive end who called out Tom Brady, Chase Young has 7.5 sacks, which is second on the team this season. He was just named Defensive Rookie of the Yeaar and is loved by all of the WFT fans. Everyone is looking forward to his energy and determination on the field. He said it himself, “I want Tom.”  And WFT fans want to see that happen. Terry Mclaurin will also be a key player if they want to get a win over the Buccaneers.

WFT fans hope that Taylor Heinicke can have better yardage totals for the pass catchers just because he is healthy. Let’s hope this QB stays off the injury list. Game starts at 8:15 football fans.