One Night in Miami…Gets Heated 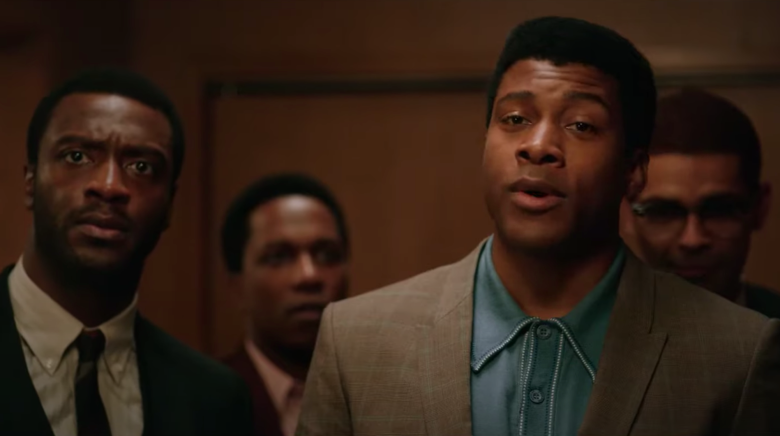 Watch One Night in Miami at home with Amazon Prime.

A Black Civil Rights activist, the newly minted World Heavyweight Champion, a Music icon, and the greatest American Football player stand together in the same hotel room. While this setup seems fictitious, on February 25, 1964, it really did happen. Each of these four men, Malcolm X, Cassius Clay (known later as Muhammed Ali), Sam Cooke, and Jim Brown, dominated their corners of culture and left behind illustrious legacies. But, besides an empty tub of vanilla ice cream, not much is known about that historical night. In their new film One Night In Miami…, Kemp Powers and Regina King create a impactful manifestation of these ideological debates and the influential men who had them.

The film’s titular night begins by following Cassius Clay (Eli Goree)’s triumphant boxing victory over the “unbeatable” Sonny Liston. To celebrate the momentous occasion, Clay’s spiritual mentor, Malcom X (Kingsley Ben-Adir) invites Sam Cooke (Leslie Odom Jr.) and Jim Brown (Aldis Hodge) to spend this evening in each other’s company. The men were expecting a roaring party, but Malcolm X is in a second-rate hotel room with nothing but vanilla ice cream and the night ahead of them, a night full of heated discussions and self-reflection on topics from Bob Dylan to Clay’s impending public announcement of his conversion to Islam.

Based on his 2013 play of the same name, Kemp Powers’ screenplay is enthralling and dialogue heavy. It succeeds because the character’s conversations are naturally engrossing. The men debate issues of their time that are still strikingly relevant today, like one debate between Malcolm X and Sam Cooke over whether to assimilate or challenge the norms set by the white majority. Cooke defends himself by arguing that change from within the system is possible through his own power and success. But the debate is also about human insecurity, as Malcolm X thinks Cooke is not being true to himself and his music. Their argument feels intimate and important, giving the audience something that’s both politically and emotionally resonant, which is reflective of the film as a whole.

One Night In Miami… is so riveting because no matter where or when you watch it, the conversations will still be meaningful.

The film’s theatrical origins prevents it from fully having the mobility and structure of most other films. Nearly all of the action takes place in the same room or its surroundings, which works perfectly on stage, but doesn’t fully transfer on film. But One Night In Miami…makes up for its claustrophobic setting with amazing performances. All four leads are remarkably strong in their roles. They inhabit their icons with grace and passion, perfectly capturing their essence. Eli Goree’s dynamic performance as Clay provides the film’s most lively moments and Leslie Odom Jr.’s turn as Sam Cooke is an incredible feat in both acting and singing (Odom Jr. also sings the film’s ending credits song). Regina King may have had limited opportunity for scene direction, but she proves her talent by skillfully crafting such well-rounded performances.

One Night In Miami… is a debut film for both Powers and King. His first play and her first venture into directing after an inspiring career in acting (this film also made her the first Black female director accepted into the Venice Film Festival). It’s rare for a debut to be as polished and as praiseworthy, but with its emotional power and historical relevance, One Night In Miami… hits that mark.