Netflix Film Moxie Attempts to Smash the Patriarchy, But in a Fun Way 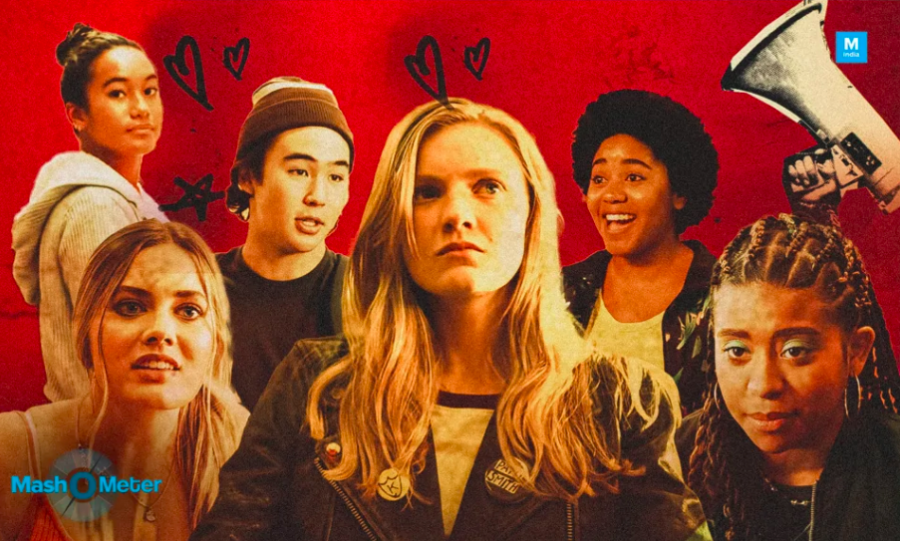 Teenage girls are fed up. Fed up with school, fed up with work, and most importantly, fed up with the constraints and injustices at the hands of the patriarchy. Instead of standing idly by, teenage girls are raising their voices, smashing glass ceilings and starting revolutions between class time. As every year passes, more and more teenage girls from all walks of life get involved in different kinds of activism, resolving to fix what’s wrong with the world. These admirable and courageous “rebel girls” are the focus of Netflix’s Moxie, an engaging take on the classic teen drama for a generation of girls who won’t stay silent.

The Amy Poehler directed film centers on a high school junior, Vivian (Hadley Robinson), as she struggles to figure out what she’s passionate about because, for her, life has just been about getting by and hanging out with her best friend, Claudia (Lauren Tsai), enjoying the comforts of being wallflowers. It isn’t until her mom (Amy Poehler) casually mentions her past as a Riot grrrl attempting to “smash the patriarchy” that she finally feels a pull. Vivian goes down a rabbit hole of feminist culture, diving deep into leather jackets and Bikini Kill, which opens her eyes to the rampant sexism and injustice that exists in her own school.

Wanting to stand up but not stand out, Vivian decides to create a feminist zine (a type of magazine) called “Moxie” that calls out the misogynistic culture that defines her school, while also creating ways for the female population to feel confident and comfortable. Moxie sparks a revolution of sorts, liberating the female students to have a voice, including starting a “Moxie” club dedicated to furthering the fight. Vivian is impassioned but must deal with the consequences of keeping her identity a secret and how her intense activism alienates her from loved ones.

The first thing you’ll notice about Moxie is how loud it is and the blaring soundtrack of Bikini Kill’s Rebel Girl is just the start. It’s loud not only in the voices of the empowered girls, but also in it’s outlandish caricature of high school life. From Vivian’s meekness to the bafoonish English teacher (Ike Barinholtz), all of the characters feel like their own version of overused stereotypes. The film’s villain, Mitchell (Patrick Schwarzenegger), is a racist, sexist, nightmare, that also feels like a spoof out of Not Another Teen Movie. While I think that using these big, slightly outdated sensibilities can be useful for people living in slight oblivion, they lack the nuance to make the film seem like a plausible situation. The film has all the right ideas about injustice and is super admirable in its encouragement of teenage girls to stand up for what they believe in, but I wish that it called out the subtle microaggressions that are present in every public education system.

Unfortunately, the film also doesn’t do the best job at truly demonstrating the intersectionality of the feminist movement. Despite having a very diverse cast of talented actresses, the film’s protagonist is White. Now this wouldn’t be so much of an issue if any of the non-White, non-straight characters got an ounce of the character development Vivian had. While I understand that Moxie is a coming of age story focused on one girl’s journey, it clearly wanted to be a celebration of feminism and diversity, but came up short. Vivian’s friend Lucy (Alycia Pascual-Peña) is the real catalyst of the movement, stating in one the first scenes that she refuses to put her head down (long before Vivian decided she felt the same way), her actions were imperative to the group’s success throughout the film, yet we barely get any info on her life outside of Moxie. I think the film would’ve been incredible if it was an ensemble piece that let all of the different girls get their moment to shine.

But despite its inaccuracies, the film is a lot of fun. I enjoyed every minute of it. This is thanks to a killer soundtrack and visuals, which keep it on a fast pace. But also the chemistry between Vivian and her love interest, Seth (Nico Hiraga) was super adorable and their scenes were a joy to watch. The film has its faults but its heart is clearly in the right place and will definitely be a valuable resource to any who is interested in taking a stand. I think the acting was also solid overall, the standouts being Hiraga as Seth and Pascual-Peña as Lucy, but the scenes with the girls as a group were the real highlight, their passion and dedication really shone through. There’s moments in the film that made me smile from ear to ear, and I can’t imagine how nice it would be to watch with a group of girls who are just as excited about changing the world.

Even though they’re more vocal than ever, teenage girls still don’t always get the chance to say what they’re thinking. Though the film lacks in many places, Moxie’s bubbly and unapologetically excited atmosphere has given them a chance to scream at the top of their lungs.