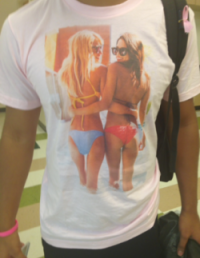 We live in a society that oversexualizes girls and women; we are a pair of breasts and legs, and only serve to be looked at. The media projects an image of beauty that is unattainable but has became the standard. Males look at this standard and believe that’s how every woman should look. We should have large breasts, long legs, small waists, long hair, and the list goes on. This “ideal body” is seen everywhere; it’s in magazines, movies, television, and now in schools.

Recently I have noticed a trend among teenage boys regarding their clothing. They wear shirts that display women in a degrading and demeaning manner. This oversexualization of women cements how society values us. We are here to only be ogled at and an object of pleasure. Who we are and what we think is being put second to our looks.

Our generation is already being exposed to thousands of degrading images of women; now they are being brought to the classroom. Both girls and boys are reprimanded for inappropriate clothing; however it feels as though more girls are sent to the administrator’s office for bra straps or cleavage, than boys are sent for these demeaning shirts.

Why is it we aren’t allowed to show our cleavage, but a boy can wear a shirt that puts a women’s boobs on display? I am not arguing that girls should be allowed to wear clothing as revealing as portrayed in these shirts; however, I believe that it is unjust to punish girls for clothing deemed inappropriate when boys wear distasteful images of women on their chest like there’s nothing wrong with it.

It is frankly disgusting how easy it is for boys to wear these shirts. I’ve talked to my friends and they argue it’s only a shirt, but this is a shirt that’s saying its okay to objectify women. I believe that as a school we should be facilitating learning, not spreading the sexualization and objectification of women.

Everyone needs to help put a stop to these shirts. They are not only creating low self esteem for the girls who see them, but they are creating a culture that believe women are only here to be gawked at. This is a problem all girls face daily, but we as a school can take a step forward and at least end it here, a place meant for learning.

Let your voice be heard; comment below on how these shirts make you feel.