Heroes Off Stage: The Great Gatsby

A sound board. Old Wine bottles. Teal and Gold dresses. A power drill. One spotlight shines down. All of these things combined help the Wakefield Theatre present The Great Gatsby. The show runs this Friday and Saturday at 7pm.  The Chieftain has an exclusive, behind-the-scenes look at what it takes produce this play.  The tech team is responsible for taking the auditorium stage, and the actors who stand on it, into a whole other world: Long Island, New York in the 1920’s.

There are six different groups that make up the tech team: set design, props, costumes, makeup, lights, and sound.  When they come together, they run the show. “Sometimes it can be dangerous to be a techie” said senior and set designer Sidney Shahriari. “We have to work on the set with regular construction tools, like hammers and drills.”

“The first thing…built…[was] the car…done by Jake Bucks, the stage manager, at his house” she said.

Evan Voldal, another set designer discussed set design and production as he wielded a power drill. “First, we design the set on paper, and then we get the correct measurements of wood that we need…when we’re actually building, we have a work table so we’re not drilling into the ground.” 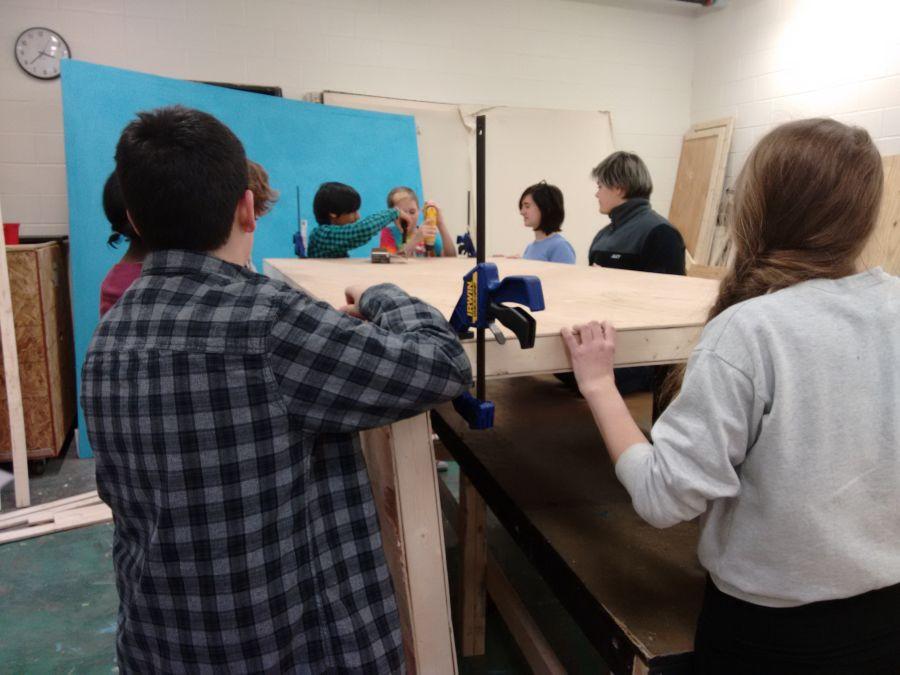 Next on the exclusive behind the scenes tour was the props closet; there is a metal shelf against the wall, a fur coat lays against an easy chair, a wooden drink cart sits in the middle as several articles of clothing threaten to spill on to the floor. “Most of our props are old-fashioned, and a lot of them are old wine bottles. There aren’t very many hard or complicated props…they’re still important because without them…the actors are just kind of standing there.” said Jackson Hambridge.

Costumes really help tell the story. “The show is set in the 1920s, so we’ll usually go to thrift stores like Goodwill…find something…that we can easily alter.”  said senior and costume designer Julia Setlow. “It’s measuring and sewing…each character has their own color palette…someone like Jordan wears more neutral colors…Gatsby, Nick, and Daisy, wear much brighter colors.”  Costumes have an important role in making scenes more believable to the audience. “There wouldn’t really be much of a production without costumes,” said Setlow.

Makeup artists can have the most difficult job backstage. There is no cutting and measuring a person’s face. They have to transform a high school student’s face into the face of an entirely different person. Makeup is more challenging “for this specific show, because we are trying to evoke a theme of power.  Makeup adds…to the effect of the show. Once [the actors] feel like they’ve become a different person, they can act more like that character” said senior and make up artist Maddy Buchanan.

Lights and sound are not even discussed until near the end of the production. Voldal explains why, “The lights can be designed so much quicker than building a set…so they’re put off until tech week…all the actors know all of their blocking and all of their lines, so it’s so much easier to know [where]…he’s gonna be…[so]…the light should be shining on him [here].  Lights and sound go together because both are really heavy on actual technology.” He divulges some more secrets from the depths of the control booth. “We have the Cyc, which is a blank curtain that we can project lights onto to set the mood of the show…  It allows for effects like silhouettes.  Then we’ve got regular lights that shine on the actors, and then colored lights that you’re able to mix together.”

“The lights are heavy when you set them up, but afterwards, they are pretty easy- you plug them in, and a program on the computer connects them to the lightboard.”

What would the production be with without lights?  Evan gives a brief, but honest answer, “It would be dark.” 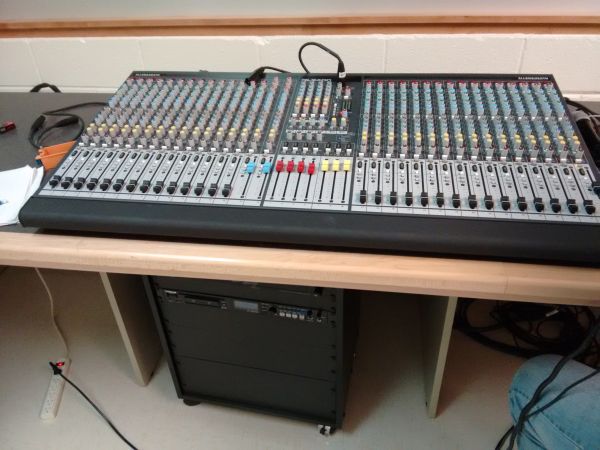 Right next to the lightboard in the control booth is the soundboard, a box with lots of knobs, switches, and lights on its surface.

“The sound system looks so complicated, but it’s actually really easy.  So, the soundboard has rows, and then there are faders to make the sound louder or quieter, and the gain for how much sound there’s going to be.  They’re all identical, there are around 50 of them, and it’s all much simpler than it looks, because they’re all pretty much for the same thing.”  Evan says.

“The board runs sound to the speakers, and there might be a speaker behind the stage so that if there’s a really loud sound effect, we can play it through that one, so that the sound isn’t overwhelming.”

“There’s telephone ringing, raining, and various ‘car sounds’ from the drag race,” Evan says, listing some of the different sounds that will be used for the production.

Each and every person on Tech contributes to the transformation of a high school theater into a Long Island mansion in the 1920s; with the spotlight focused on a group of high school students who are transformed into characters from another time, another world. It’s the kind of magic that can only be made possible by the Tech crew, the heroes off-stage.