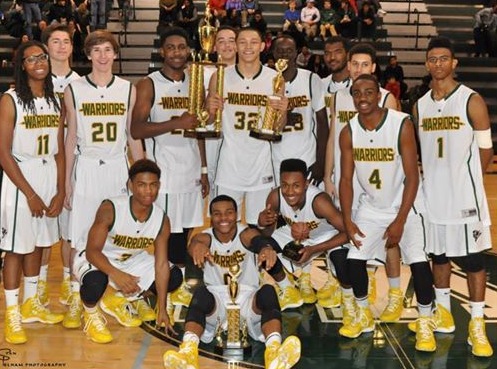 The Varsity Boys Basketball team hosted the annual George Long Holiday Tournament about 2 weeks ago. The schools they defeated were Washington Lee, Kecoughtan, and National Christian Academy. The team showed who they really are on the court this year. It was the first time the team has won the tournament since 2006!

On December 26th, our Warriors played the Washington Lee Generals, #crosstownrivals, in round one of the George Long Winter Tournament. Our talented Wakefield Warriors led the game the whole night and ended it with a big victory over the Generals, 82-47.

The day after the victory against Washington Lee, the boys went back to work! Our warriors played the Kecoughtan Warriors from Hampton, Virginia. This battle between the warriors had a lot of ups and downs on the scoreboard; in the end, our young men won 70-58, #warriornation. Sophomore point guard, and new Varsity player, Alan Treakle said, “I took care of the ball for our team and I knocked down my free throws late in the game to secure the W.”

The George Long Holiday Tournament became a special event and such a great holiday gift for the Warriors. They won the tournament with a 3-0 record and upset a very much taller team than the average schools they have played. National Christian Academy Eagles from Fort Washington, MD traveled down to Arlington to play the Warriors in the tournament championship game on December 29th.

This was one tough fight for the boys but they still finished strong. VBB finish the night off with a 64-58 victory win and were named George Long tournament champions. For the first time in almost a decade, Coach Bentley brought the George Long Trophy back where it belongs…at Wakefield!

After the game was over, Coach Bentley announced Wakefield’s runner-up awards. Seniors Marqua Walton and Dominique Tham received the all-tournament player award. Treakle received the touney MVP award. He said, “I was shocked. Since this was my first year at Wakefield, I didn’t expect to get it. I thought Domo or Qua would get MVP.”

The boys traveled to VA Beach and won the VA Preps Class just before Winter Break ended; the final score was Wakefield 78, Kellam 66.

These winning warriors are now 9 – 1 for the season.

Varsity boys play Hayfield on Friday, January 9th at 7:30pm. Domo will make his 1,000th point tomorrow. You really don’t want to miss any of the remaining four home games.