Coach Of The Year: Tony Bentley 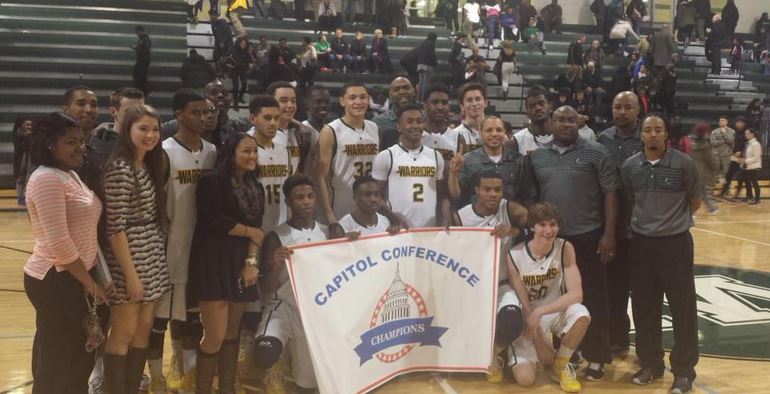 The team poses right after the final win against Edison which won them the Conference Championship.

“He is a player’s coach,” said sophomore Alan Treakle, “we can talk to him like he is one of us.” Wakefield’s very own Coach Bentley has won Coach of the Year for the third year in a row. On winning that honor, Coach Bentley said, “In order to be named coach of the year, I have had some great players and staff here at Wakefield. I am very proud of them.”

What does it take to be Coach of the Year? The Chieftain sat down with Coach Bentley to find out.

“I’m gonna retire here,” said Bentley with pride as he leaned back in his desk chair surrounded by news clippings and stats of his team, “I’ve been asked: ‘would you leave Wakefield for a college job?’ and you know? I’m happy here.”

After coaching Football and JV Basketball at his Alma Matter, Washington-Lee, Bentley decided he wanted to put his effort into becoming a Head Coach. “In 1999 I stopped coaching football to focus on basketball, and in 2002 Wakefield’s job was open which no one thought would ever be open because Coach Bob Veldran was here for 31 years.” Bentley was nervous about taking the job; going from JV coach to Head Varsity was a big leap, but he was confident he could make an impact on the team. He knew he had big shoes to fill on Wakefield’s court. “He [Coach Bob Veldran] was a legend that I looked up to.  He won 443 games in his career at Wakefield; I am at 226, so I have a long way to go.  He and the present football coach at Yorktown, Bruce Hanson are the best coaches that Arlington County has seen at their respective sports.  I am no where near those guys.”

Growing up, Bentley lived a little over a mile away from Wakefield in Green Valley. He followed Wakefield Basketball as he followed his own team, so he wasn’t too worried about the switch between the rival schools. “I’m born and raised in Arlington County so I knew the Wakefield kids and I knew the Washington-Lee kids” said Bentley, “kids are kids and ball is ball; it’s a difference in style between the two schools.”

Bentley remembered a proud moment when Arlington came together, “The first regional championship, which was in 2005, we were 27 and 0 going to the state finals” he said, leaning back with a smile, “and the community just rallied together. There was no more WHS it was Arlington High School.  We won the state quarter-finals which made us 28-0.  Then we lost…28-1.”

“I mean it’s funny,” said Bentley, “in Arlington…everybody has their opinion about north and south, but that year we were all one, and it was really good to see the community come together, and see the kids come together.”

“It’s bonding” Bentley said regarding his relationship with his players, “you know, we say your true blood family is your family first but we really talk about family a lot. These are brothers, and you don’t want your brother to hurt, so you do whatever you have to for your brother. You have to build. That’s my job. I have to get all these kids, 15 kids, from all different backgrounds to buy into that our last name is Wakefield. Gradually you see that the best player and the 15th player become best friends. We all have to lean on each other; we’re only as good as our last guy.”

Bentley enforces this family relationships by having the boys spend as much times as possible together; “We read to the elementary kids at Claremont once a week during the season, we have meals, we have helped feed the homeless or less fortunate families, sometimes we go to church together, the boys even have sleepover together.” Bentley said, “I don’t give them time to branch off. It’s a saying: ‘surround yourself with those on the same mission as you.’ It can’t just be players 1 through 5 having that mission, it has to be six seven eight and beyond. They can’t be off doing different things.”

Many people notice that the team is always together, which is exactly what Bentley strives for, “no offense intended but if it’s basketball season, you’re not going off to go ride your skateboard. We have got to be together. We surround ourselves so much. Six days a week is a lot. I see these boys, during the season, more than my own daughters, because of what we’re building here.”

As for the future of Wakefield Basketball? Bentley doesn’t plan on leaving anytime soon, but on the day he does, “I pray it’s one of my former player that takes my coaching spot.” He made one thing clear: “It can’t be an outside guy. It has to be a Wakefield guy. An Arlington guy. But I’d be incredibly proud if it was someone that played for me.”

Here are the additional Conference 13 selections and honors:

Player of the Year: Dominique Tham

*Correction: A previous release of this article stated that Coach Bentley was Coach of the Year for two years in a row. He has won this award three years in a row.