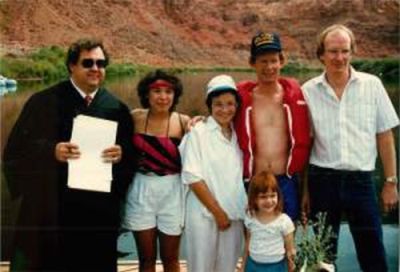 “I was incredibly lucky,” recounted veteran Math teacher, Ms. Mohler; “there was a D.C. company hiring lawyers, geologists, and ecologists. It was me and 150 kids my age all working together.” After majoring in Political Science and receiving her law degree at Albany Law School, Ms. Mohler moved from Buffalo to D.C. where she met some of her closest friends to this day.

“We all kind of paired off,” she recalled, “around ten of us found our spouse in the little group we developed. Over the course of 10 years we all had kids one after another” she said.

When she first saw Paul Mohler she fell in love. “I knew he was going to be the one,” she remembered laughing, “it just took him a little longer to realize it. He was just so…. not Sicilian,” she said beaming; “it drew me to him.”

Growing up in Buffalo as the oldest girl and third child of seven kids, Ms. Mohler has been surrounded by plenty of Italian heritage. In a family where each member had six or seven of their own kids, there was always enough excitement to go around. Every Sunday her and her siblings would pile in the back of a station wagon and drive to see her cousins. More than twenty kids would be running around, and being one of the older ones, she assumed the roll of the babysitter. Ms. Mohler was incredibly close with her family, especially her little sister who was only 11 months younger than her.

After her sister passed in 1989, Ms. Mohler made the trip to Sicily they had always talked about. “I owed it to her,” she said, “and it was amazing.” She reminisced on the scene and how she felt like she truly belonged. “These were my people,” she said, “I’d look around and any one of them could easily be my cousin, my uncle, even my brother.”

Despite the familiarity of Italy, Ms. Mohler fell in love with the complete opposite of an Italian. “He was just so calm,” she said, “I loved it.”

They met in 1979 and eloped in  ’76 seven years after. Her mother had always hoped she would have a large Italian wedding, but Ms. Mohler had a different plan to tie the knot.

“We loved kayaking,” she said remembering the excitement, “so we decided we’d go kayak The Grand Canyon.” They didn’t tell anyone except for their grandparents about their plans of eloping on a  dock in  the Canyon; before they left, they sent out post-cards to their friends, family and workplace announcing the marriage and sent “forgive-me” flowers to the mothers.

Before they embarked on their journey they found a judge and payed him $150 to meet them at the dock where he would marry them. She purchased white clothes she could easily fold up to serve as her wedding outfit and they were off.

“No one on the trip knew what we were planning” she said. They kayaked all day and camped overnight at different spots along the river. When they reached the dock, the judge wasn’t there. “We stayed in this little cafe waiting and waiting but he wasn’t showing up.”

When the other group members found out the engaged couple’s plan, because of the delay, they decided to make a wedding cake by coating a coffee-cake in whipped cream; when the judge finally showed up they made a kayak-paddle archway. “It was just so unexpected,” reminisced Ms. Mohler, “the spontaneity of it all made it worth it. Paul was still wearing his life-jacket and I was in my white outfit.”

They signed the marriage papers on the judge’s back and as they walked down the kayak-paddle aisle one of the group members threw birdseed. “It was hilarious” laughed Ms. Mohler.

After the ceremony was over, they continued on their journey; they had one of the most memorable moments of the trip. “I’ll never forget this,” said Ms. Mohler excitedly, “one night in the Canyon we watched the moon rise.” She described the incredible feeling of looking over the tall walls of the Great Canyon, where only a sliver of the sky is visible, and watching the moon drift past them.

When she  returned to civilization, her mother was furious that she had gotten married without telling her and missed out on the experience of a big wedding. Mohler admits that in retrospect she probably should have told her mother, but she definitely doesn’t regret a single thing she did.

And if her daughter did the same thing? “I’d be happy for her,” started Ms. Mohler, “but I would hope she would let me know ahead of time.”