Varsity Field Hockey: All out, All Games, All Season 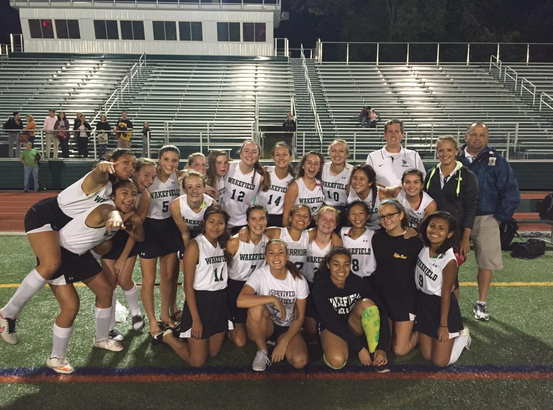 Wakefield Varsity Field Hockey  just keeps getting better and better. They went from winning only two games in 2013, to winning four last year, to winning a fantastic seven games this year.

Senior Kacy Tucker said, after scoring the two goals which won them their game against Hayfield 2-0, “I think this season so far is a lot better than last season, we are winning a lot more.” These girls have improved tremendously over the years.

Sophomore Ana Sofia Uro-De Leon said, after their final game last night, “The reason we have won so much is because Coach Mike and Coach Zoe have reminded us what it was like to be at the bottom and that pushes us to fight our way to the top. Before, we would get one goal in a season and it would be AMAZING; now, we know we can surpass the other teams if we really work hard. We can win games.”

As you walk around the halls you can always spot the field hockey player by the bruises on their shins and the turf burns on their forearms. These are the wounds of a warrior. The team has gone through so much growth over the years and learned so much together. The 2015-2016 squad will take these amazing historic wins with them as the season comes to an end.

Freshman Defense Lynne Faris said, “its good to feel like you can work really well with the team, and winning, well I just love that feeling! Making the team made me feel really proud of myself and just gives me the encouragement to really push myself into trying new things even when I believe I can’t.”

Field hockey, to some people, is just some girls with sticks and a goalie with a lot of pads. When you go see the game, you can see the players laser like focus. This team gives it everything they have no matter who or what is in their way. No matter how many shots they miss or stick battles they lose, they don’t give up.

The team ended their regular season last night with 7 wins and 9 losses. This is the best the team has ever done. With many players returning next year, it can only keep improving.