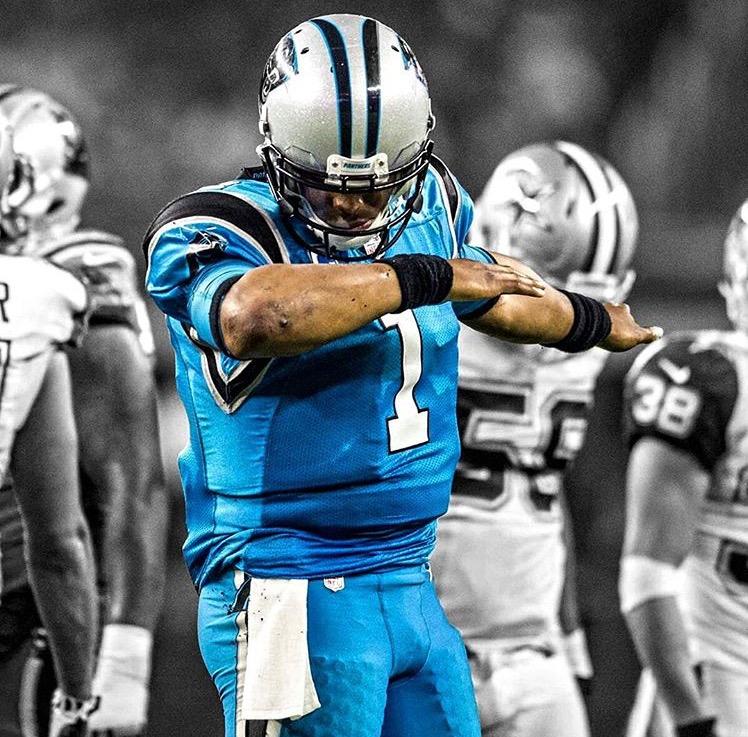 Cam Newton hits the dab in the end zone.

Last week was an outstanding week of football in the NFL! There were two undefeated teams in the NFL, but now only one stands tall. The Patriots got knocked down to 10-2, and the Carolina Panthers stand 12-0 entering week 14.

For the first time in franchise history, The Panthers are undefeated; every player on the team has helped out tremendously. The stand out player is quarterback Cam Newton.

Cam Newton, who stands at 6 foot 5, weighing 255 lbs and a 40 yard dash time of 4.58 seconds was drafted by the Carolina Panthers with the first pick of round one in the 2012 NFL draft.

Cam Newton has been playing really well this season. He has thrown the ball for 2,466 yards, connecting with his receivers for 20 touchdowns, and only 9 interceptions. But his throwing isn’t the only thing an opposing team should worry about, because the dude can run! Cam Newton has rushed for 427 yards this season crossing the goal line 7 times and then hitting his signature ‘dab’ dance to add a little more irritation to his opponents.

Here are a couple of impressive games:

In week 3 of the regular season, Cam Newton and the Carolina Panthers faced the New Orleans Saints. Cam Newton completed 20 passes out of 31 for 315 yards and 2 touchdowns connecting with his favorite target, tight end Greg Olsen for 134 of those 315 passing yards. Newton also ran the ball 7 times for 33 yards and a touchdown knocking the saints down to 0-3 after a 27-22 win.

In week 11, the Panthers took on the Redskins. Cam Newton went off with 5 touchdown passes thrown to 5 different receivers; it almost seemed as if Washington’s defense didn’t show up for the game. Cam Newton threw the ball 34 times completing 21 of them and connecting with 5 different receivers for 5 touchdowns. Great job spreading the ball, Cam! The Panthers came out with a  44-16 victory against The Redskins moving to 10-0 and knocking down the Skins 4-6.

Can the Panthers and Newton keep this winning streak? Next up Carolina Panthers(12-0) vs. The Atlanta Falcons (6-6) on Sunday at 1pm.