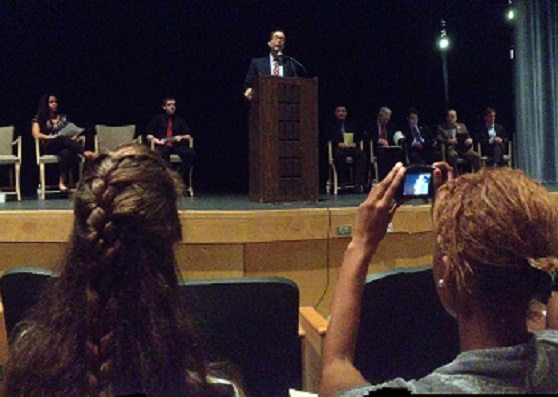 After the politicians gave a brief summary of their goals and views, they opened up the floor for questions to the audience of first time voters. Jesus Enriquez-Hernandez ‘14 asked a controversial question, “Why is Cuccinelli trying to have it a crime to speak a different language other than English, if the United States does not have an official language? Mi primer idioma es el espanol y eso nunca va cambiar (my first language is Spanish and that will never change).” Ken Cuccinelli’s representative, Matt Wavro, spoke on how he did not know if this was true, and if it was, he didn’t support it. Then, Delegate Alfonso Lopez went to the podium and confirmed that he was present when Cuccinelli, proposed the law. The crowd seemed to wake up, and a nervous excitement rippled through the auditorium. Immigration reform is  a topic with that kind of power. Lopez won the crowd when he stated, “In the Virginia I’m fighting for…there’s no one telling you you can’t follow your dreams.” Same sex marriage was also a topic that was brought up by students. Mr. Fisette got a positive reaction from this young crowd when he explained that he had recently married his same sex partner in the District of Columbia.

Overall, this assembly helped inform Wakefield’s graduating class on what to look forward to on Election Day. When you see Ms. Sheridan and Mr. Campbell in the hallways, make sure to thank them for all of their hard work and dedication.