The Evolution of the Library 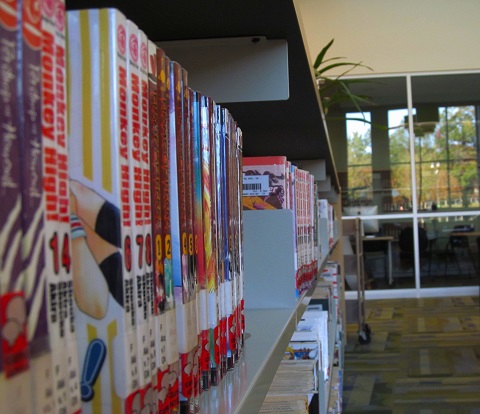 A beauty shot of one of the manga shelves in the Wakefield library.

When the library moved from the old to new building, they had to remove a lot of books. Mostly because some fo the collection was very outdated, over 15 years old. Ms. Felsenheld and Ms. Glassman seized this opportunity. They wanted to make the library a frequent stop on students’ meanderings around the school. To catch students’ attention, they (along with the fabulous library assistant, Ms. Collins) created a banned book display to the left of the entrance. There can be some confusion as to why books are banned. Ms. Felsenheld explained that apparently the issue is not always with the content. Themes, like racism and witchcraft, can also cause a book to land on the banned book list. Some of the titles on the banned book list may surprise students: Harry Potter, The Hunger Games, and Catcher In The Rye are all on the list. Ms. Felsenheld shared that her favorite banned books are currently To Kill A Mockingbird and Tango Makes Three.

These changes sure seemed to have worked. She went on to state, “there have been more students in the library so far [in the past 3 months] than we saw before finals week last year.” Wow! That is a lot of traffic. Another aspect of the popularity of this new space is the decor.  The library’s physical space is fabulous. A skylight that can park 6 cars, carpet that looks like it should be in a fancy hotel, architectural lighting, and pale pine book shelves create a welcoming environment. So many students are visiting the library during Warriors’ Period that they have had to implement an on-line reservation system, and even heartbreakingly turn some students away.  They have capped the student influx at 40 in the library and 20 in the Globe computer lab. The line is seen out the door daily.

When asked which book was the most checked out so far this year, Ms. Felsenheld replied, “not surprisingly, the Fault In Our Stars. Every John Green book is constantly checked out.” Ms. Felsenheld went on to discuss another popular choice among high school students, the manga and graphic novel collection. She explained, “there’s a whole bookshelf dedicated to manga, and the collection is bigger than Washington Lee’s. It’s massively popular, with some series targeted towards boys, others towards girls. Some graphic novels are fiction, nonfiction, biographical, and they even make manga study guides.” With exciting books like these available right across the hall from the cafeteria, expect to see the line get longer.