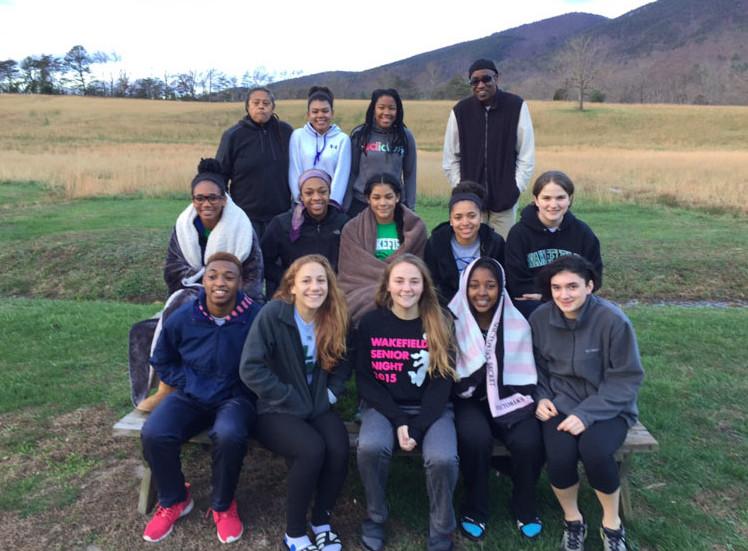 The Varsity girls started the season off strong with two wins over Yorktown and T.C  Williams High Schools. Even though they lost two games after, they plan to come back strong and win the season. The game against Stuart last night showed their fire. They won 74-22 at home.

We caught up with some of the players to get their thoughts on the season so far.
Sophomore Jami Tham said, “one of my goals is to communicate more so that we can collaborate a lot better. We all have good chemistry, but we just need to learn how to bring that chemistry out on the court.” The Tham name is well known on Wakefield’s court. Her older brother, Domo, just graduated last year, also her father played when he was in high school. She brings strength and that strong family legacy every time she comes to the court.
Freshman Tae’lor Willard has become a force on this team. Willard said, “I’m loving my new team. I feel like Coach Rich knows what she’s talking about; she’s is very supportive, and wants to better us individually, but more importantly as a whole. With her coaching style…everything she’s taught me so far, has been easy to remember and retain.” She leads the girls with the fire and energy that she brings to the court. She is one of the four freshmen that has joined the team this year.
Junior Lyrin Hatcher said, “you wouldn’t be able to tell that they are new to the team or freshmen; we have a lot of chemistry. They play like varsity basketball players.” When asked about the new players and freshmen, who have joined the team this year. Hatcher said, “being a Small Forward and Power Forward, one of my main goals is to contribute to the team as much as I can and hopefully, get looked at by different colleges.” The Hatcher name is also well known on our court. Her older sister Lyric graduated from Wakefield and ruled the court like a queen her senior year. Lyrin played great with her sister on the team last year and continues to carry the Hatcher legacy.
In her third year on the team, junior Hailey Finlay said, “something we need to do to improve is definitely our defense, especially side D and cutting off the baseline. The biggest thing right now is our free-throws and rebounds. If we don’t rebound and outlet it quickly, we can’t do what we do best; run the floor. We’re a great team, we just need to refine somethings and stay aggressive as a whole.” That’s what cost them their two losses this season; they let the other team take control. Finlay said, “my main goal on varsity is to do the little things that people may not always notice, but that you can’t win without. I strive to be a better leader for our younger players.”
One of the leaders on the court, junior Summer Matlack, said, “I really like having freshmen on the team because they’re really eager to learn and work hard. It also gives the team new energy. We have more chemistry than last year, everybody enjoys everybody, and we even like our managers.” After talking about some of her famous plays on the court, Matlack said about the future of this season, “I feel like we have more talent, and more people can contribute on the court. It’s not just one person scoring. It’s real team effort.” Matlack has been on Varsity her whole high school career, and she’s back, controlling the court with her whole team right beside her. “My personal goal on Varsity is to be a leader for my team, on and off the court. The main goal I have for my team, is to never play a game scared, and when we go out on the court I want them to believe that we can beat any, and every, team we go against” said Matlack.
Tham summed up everyone’s hopes and hoop dreams when she said, “my main goal is to get a banner up! YEAAAAAAH!! I’m really excited to see how well we improve, from now to my senior year.”
The girls have grown a lot in the last few years. Join #warriornation to see them progress throughout the season.

They play at home tonight against South Lakes at 7pm and the Tuesday after Winter Break at home against Thomas Jefferson at 7:15pm.