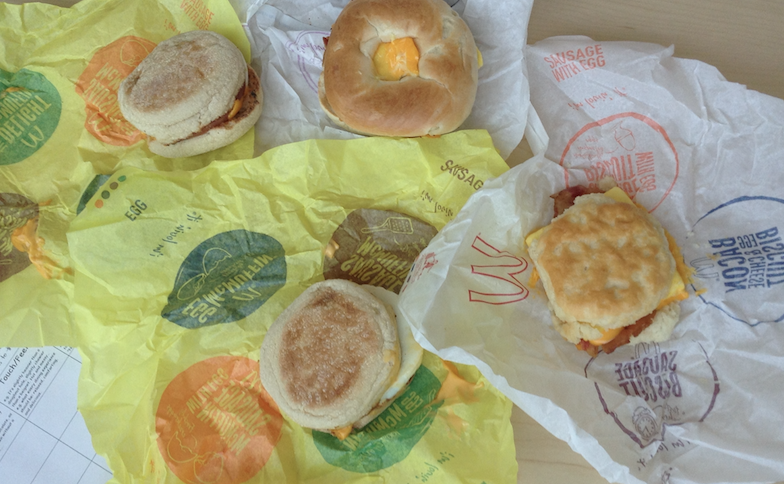 McDonalds breakfast options are laid out for you.

McDonald’s has had all day breakfast for three months! It looks legitimate and exciting, but when you want a McGriddle at 3pm…you may be disappointed. The longer wait time and limited options make all day breakfast less than exciting.

The Chieftain decided to see if Mc Donalds could keep the griddle hot and the options steamy during breakfast hours at least. We tried three different breakfast sandwiches. This guide should help you decide what you want to eat for breakfast if you are stuck.

First, we tried one of the most popular options on the menu, the Egg McMuffin. I (Savannah) thought it was really salty and the bread was overwhelming. Freshman Mominah Tariq said, “the sandwich felt pre-made and everything was sticky.” The Egg McMuffin might not be the best option from the reviews it got.

Next, we tried the Bacon, Egg & Cheese Biscuit. I (Elena) thought the biscuit had a very strong cheesy smell, and the eggs looked like rubber. The overall consensus with everyone at the table was that the biscuit was not the best option; it didn’t taste like much. It was quite crumbly and the strongest taste was cheese.

The final breakfast option was the Bacon, Egg & Cheese Bagel. Junior Sara Gomez said, “it wasn’t as satisfying as I thought it would be.” Irvin Flores said, “it smelled amazing, like waking up to your grandma’s breakfast…I love it.” (Bah, bah, bah, bah, bah…)

Although the reviews were harsh, sometimes we can’t help but go. McDonald’s is a quick and easy breakfast option, especially for busy high-schoolers.