The Untold Story of Outdoor Track 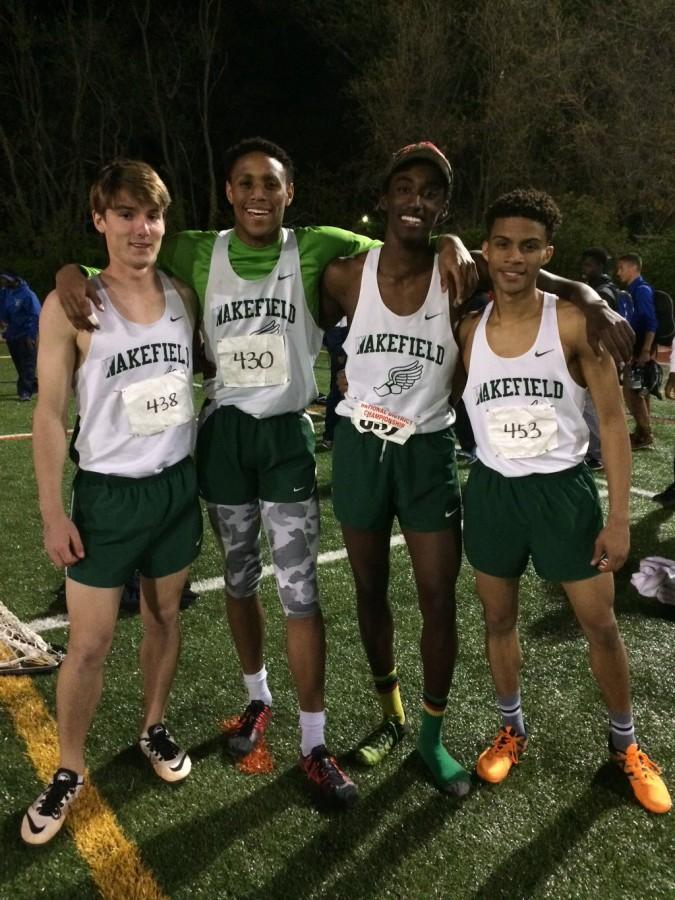 The 4X4 team poses for a picture. Xavier's shoe is still off from when he lost it during the race.

To most people, the first thing that comes to mind when they hear outdoor track is a lot of running and sweating. That’s only part of it, the rest of outdoor track is hard training, practicing skills, and beating the person beside you to get a spot on the 4×100 team.The Wakefield track team has been making history for years, but no one has paid attention. At Wakefield, the sports we focus the most are usually Varsity Football and Basketball. But of the most unappreciated sports that Wakefield has to offer, outdoor track is one of them.

This year for outdoor track, the team has a new set of champions. With the help of  Senior Eric Martin, Sophomore Xavier Taylor, Senior Jonathon Xavier Adams, and Freshman Louie Delcore competing in the 4×4 relay, the Track team is finally getting some recognition.

Even though this was their first time running, the 4×4 the team did amazing. They did so well that they qualified for states! That isn’t even the most amazing part of this story! In the middle of the race, Sophomore Xavier Taylor’s shoe came off and he kept running. Imagine how hard that must have been to keep pace with one sock and one shoe. The team still won…by a HUGE margin! Right after the race Coach Strauss could be heard tell of the only other time in hi long history as a track coach when that happened…over 14 years ago. It was a wonderful moment for the track team. This 4×4 team may be brand new, but the raw talent that they have will take them places.

I asked longtime outdoor track team’s head Coach Robert Strauss what his most memorable event was throughout his coaching career and his response was simpl,e with a lot of emotion. He said, “there was a runner her name was Fatima Shuler, she was a regional and state champ even though she ran in lower heats, she won back to back State and Regional titles.” Even though she won those titles back in 2002, 14 years later they still are relevant.

Track can be used to condition for many different sports. To some, if they want to get faster for other sports like football or basketball, they could turn to track. All and all, even though the team is not promoted as much as other teams they are still playing strong and doing great things.

Come support our running warriors on their Senior Night. It is TONIGHT! Be in the stands by 5:30pm, #warriornation.