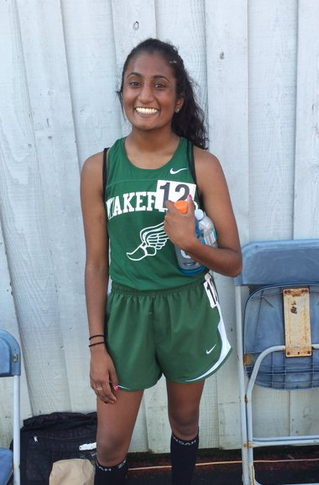 Lydia after her run at States, and breaking her own school record.

Wakefield has seen Lydia Dunbar run for 5 years. This year, she wanted to end her senior year strong. Little did she know in September that she would far exceed any goal she could set for herself.

Lydia wanted her Senior Project to be memorable. So, she focused on running. “For my topic, I decided to run a marathon” she said. “That started a chain reaction. I wanted to make it to States for indoor track, and then States for outdoor track.” These were 3 huge goals. Lydia was nervous, but thought she could do it.

She wanted to make it to States. “I missed States by 2 seconds my junior year, and knew I had to give it my all this year.” She kept pace and time with her 3 track coaches. As she shaved seconds off, a new goal emerged. “I just kept pushing and pushing. One day my dad said, you could break the school record if you keep shaving off these seconds.” Lydia laughed with him on the side of the track. What a concept.

This put Lydia in a great frame of mind to run a marathon. Lydia fulfilled this life long goal on March 12th. She ran in the Rock n Roll Marathon in DC. Family, friends and Wakefield Staff were there to cheer her on. She finished in 4:05:02, and “ran the whole way!”

When most seniors were getting accepted to college and their work habits began to wane, that is when Lydia had to keep up the pace. As States for Outdoor Track got closer and closer, the idea that she could actually break a long standing school record  became more realistic. “I broke my personal record in the 3200M.” That day, “Coach Strauss told me, I want you to break the record” at the Draper Invitational, the race before Regionals.

Only the top 6 runners make it to States every year. Her first goal was to make it to States, to be able to keep competing her final year of high school. Breaking the school record “would just be a bonus” on a very successful senior year. “I broke the school record for Girls 3200m (2 miles) at Regionals. I was on my way to States for outdoor track. I didn’t know when I finished. My dad was at the finish line. My dad said the time at 11:48:02; it was so surreal.” The previous record was in the 80’s and was around 11:49. So when she heard the 8, she knew she had broken a school record.

Making it to States came with a price. She had to miss Prom. She said, “I’m kind of bummed, but I made this as my final goal.” Lydia knew that each individual race is what counted. She was nervous about States, because every runner has had “some pretty crappy races” every season. She didn’t know what the day would hold for her.

With a time of 11:41.52, Lydia broke the school record again at States. She also earned 8th place out of all competing runners at States. She contributes her success to her coaches; “I owe my coaches a lot. I have known them for 5 years, since I was 13 years old.” Because of them, she has a lot more confidence when she runs and take the sport more seriously.

Was that all for Dunbar? No. She also won the Better Sportmen of the Year award at the annual banquet this year.

Lydia says of her senior year, “It was nice to experience this much success…It brings more attention to Cross Country, Indoor, and Outdoor Track for Wakefield. It is also really nice to get all this recognition.”

The future for this record breaking runner? “I want to keep running at Syracuse. It is a good school, known for its running team. I will just try to stay active my freshman year and keep running. I don’t want to be on a competition team until later.” With this solid plan in place she is ready for move in day on August 23rd.