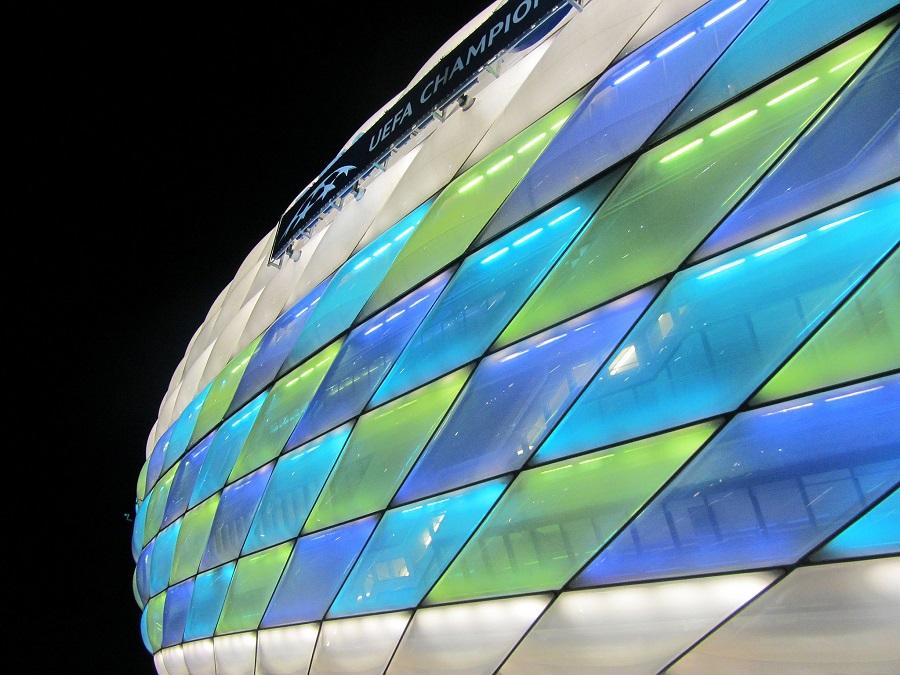 Allianz Arena lights up with different colors depending on the game. (Photo per CC License: http://bit.ly/2dsE6k0)

Allianz Arena lights up with different colors depending on the game.

The first round of the 16/17 Champions League Group Stage has been dramatic to say the least; from Barcelona decimating Celtic 7-0 to Real Madrid’s dramatic comeback against Sporting.

Let’s see how your team did:

This wasn’t exciting. It was a stalemate, and both of the goals scored were because of defensive screw ups. My MOTM (Man Of The Match) is Cafu because he scored the better goal.

Arsenal were being Arsenal again. 42 seconds in and its 1-0 to PSG, a Cavani header. Even with their new centre-back pairing of Laurent Koscielny and Shkodran Mustafi couldn’t seem to stop Cavani and PSG. They also need to find a new left back before Nacho Monreal gets Arsenal relegated. Arsenal were lucky to not lose 3 or 4-0. Yet, of course, Alexis Sanchez saved the day with a lucky goal. My MOTM is Édinson Cavani.

Now this game was an interesting game; it was a game of long ball attacks. Beşiktaş should have won. My MOTM is Anderson Talisca, because of his great free kick.

It was a game of the first half, all three goals scored in the first half. My MOTM is Arkadiusz Milik for his brace in 10 minutes to win the game for Napoli.

Absolute Destruction, yet an Absolute Masterclass. This game could have been 9, 10, or even 11-0. Celtic had 1 chance to level it with a penalty but Dembele took an unnecessary stutter step and Ter Stegen easily blocked it. I can’t choose a MOTM because Messi, Suarez, and Neymar (more commonly known as MSN) all had amazing stats. Messi scored a Hat-Trick and an assist, Suarez had a brace and and an assist, and Neymar had 4 assists and a wonderful free kick.

Absolute Domination from Guardiola’s City as expected. This is also Guardiola’s First win against Mönchengladbach as he never was able to beat them with Bayern München. My MOTM is Agüero for the Hat-Trick.

Time for my favorite tie (HUGE BAYERN FAN ALERT). FC Rostov was “on full damage control” (-Ryan McCoy, Bayern Central) and Bayern were just being Bayern and dominated (and no I’m not being a crazy biased Bayern fan). My MOTM is Joshua Kimmich, because his brace, and in the last 2 weeks have been crazy for him. He scored his first goal for Die Mannschaft (German National Team) against Norway, then in his next game scored his first goal for Bayern against Schalke, and in this game scored his first Champions League goals, and he is only 21. Very, very promising.

Very good first 15 min for Leverkusen but from there on is was CSKA. Very poor defense of a 2-0 lead by Leverkusen. My MOTM is Dzagoev.

Tottenham hotspur lacked energy and eventually Monaco overcame them. But you also could say they didn’t feel at home because they played at Wembley Stadium (English National Team Stadium) rather than White Hart Lane (Spurs Stadium) because White Hart Lane didn’t meet UEFA standards of a Stadium that was gonna host a UCL ( UEFA Champions League) game. My MOTM Thomas Lemar for being a super sub and scoring the game winning goal for Monaco.

Simple, Thomas Tuchel told Dortmund to dominate and they did. My MOTM is Christian Pulisic. The young American that is rising to fame got his first UCL assist and is the youngest player to do so. (It’s hard to say this as a HUGE Bayern fan but, Congrats. Christian.)

It really should have been an easy 5-0 stroll in the park for Madrid. But they just didn’t take there chances and were about to pay for it had it not been for a crazy free kick from Ronaldo (who respectfully didn’t celebrate against his old team) and a literal last touch of the game goal from Alvaro Morata. My MOTM is Ronaldo for his wonderful goal and his respectful lack of celebration.

Leicester City made their UCL debut in this game after a phenomenal season in the PL and…wow. A Riyad Mahrez brace stole the show, with one of the goals being a delicious free kick. My MOTM is Riyad Mahrez.

Nothing much to this game. It was just a 1-1 draw. My MOTM is Cornelius.

It was a thrilling 0-0 game. Yet both teams didn’t capitalize on mistakes. Allegri (Juventus head coach) should have a more disciplined attack as it was all over the place in this game. My MOTM is Paulo Dybala.

Zagreb were not really in the game and Lyon capitalized. My MOTM is Tolisso.

Wait until next week, readers, for my article about Day 2 that just wrapped up yesterday.