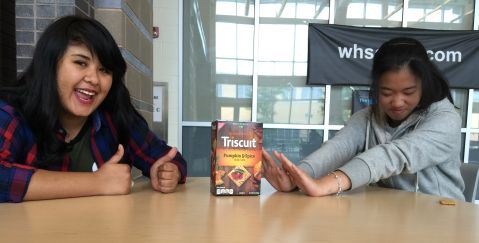 Pumpkin Spice: The Pros and Cons to this Flavor Take Over

Pumpkin Spice and Everything Nice

Halloween is here! The best part about this time of year is THE PUMPKIN SPICE flavored food.

The only thing that I can think about after the September Equinox is “so when is Starbucks going to announce the Pumpkin Spice Latte?”

Everything this season is warm and full of that perfect “Autumny” vibe, from Pumpkin Spice Cheerios to Pumpkin Spice Triscuits, I can’t get enough of it! You might be thinking, “but pumpkin spice isn’t made out of an actual pumpkin!”  and you would be  absolutely right,  it‘s not. But, it is the perfect mix of cinnamon, nutmeg, ginger, allspice, and clove that gives it the perfect fall flavor that I absolutely adore!

Autumn already has a lot of amazing things, like sweater weather, leaves falling; having pumpkin spice flavored food just makes it all better. Pumpkin spice is to fall, what peppermint candies are to the winter holidays.

Pumpkins are a big part of Halloween! Everything, well mostly everything, is flavored with Pumpkin Spice. Before doing this, I had never tried anything that was Pumpkin Spice; I always thought that if it said pumpkin it would taste like pumpkin. Join me in my first time pumpkin spice adventure!

When I tasted this flavor for the first time, it didn’t taste like pumpkin at all.

Before I tasted the Pumpkin Spice Cheerios, I thought they would taste like pumpkin, and smell like pumpkin. It turns out that they tastes more like cinnamon, smell like regular cheerios with sugar, and are way too sweet for breakfast!

They had a really strong and promising Pumpkin Spice smell, and looked like a really good dessert to have after a meal. I think this was the one that left me disappointed the most because the cream filling was flavorless and the cake around it was too sweet. Overall, it was okay, but I probably won’t be eating it again.

At first I thought it would taste like pumpkin “jam” inside of a tasteless cookie. But to be honest, it tasted nothing like pumpkin and had more of a gingery flavor. The frosting on top of the pop tart was so sweet that it overpowered the pumpkin “jam.” It might be a quick snack but it’s still way too sweet for me.

The picture on the box, which looked like smiling jack-o-lanterns, was pretty cute but it gave me high expectations. I had never had prepackaged cakes, so the first thing I noticed was the plastic wrapping. I still had high hopes that I’d finally be able to taste the pumpkin. When I opened it, the cake smelled like pumpkin, however, it tastes nothing like pumpkin. I’m really sad because the actual cakes were so cute that I thought it would taste good, but I won’t be trying it again.

After tasting all of the pumpkin spice flavored foods, I found that most of the treats have a pumpkin smell, but there isn’t any pumpkin flavor in it. Some of them gave me a feeling that the sweetness of the treats covers the pumpkin taste even though there is pumpkin filling inside. I was excited to try them because I had never tried anything like this before, but I didn’t really enjoy them. I couldn’t taste any pumpkin, and most of the things I tried were too sweet. From my prospective, it shouldn’t be called Pumpkin Spice if it’s not going to taste like pumpkin at all.