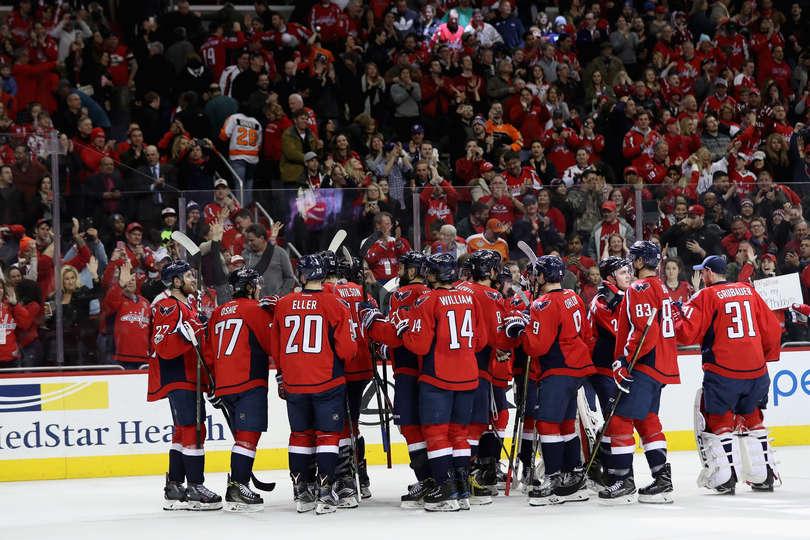 While being surrounded by thousands of fans, the Capitals take a moment to strategize.

The Washington Capitals: #1 in the Entire League

Washington currently has a record of 44 wins, 14 losses, and 7 OT losses.

These achievements wouldn’t be possible without the perfect mix of veteran players and rookies. Rookie Left Wing, Jakub Vrana, has stepped up and made a few big plays for the Capitals. According to NHL.com, he said, “I appreciate any time up here in Washington. It’s the best team in the League right now.” Center, Nicklas Backstrom, and Right Wing, T.J. Oshie, have been contributing to the Caps successes with goals and multiple assists.

Without the help of Braden Holtby, the goalie of the Capitals, these victories would most likely be unattainable. According to NHL.com, while in the middle of an interview, Holtby said, “I couldn’t think of a better place to play, with what we’ve done this year, with what we have going forward, with where we’re at as an organization, I can’t imagine myself playing anywhere else. I’m a Washington Capital and that’s all I want to be.”

Playing well, at home and away, the Caps don’t seem to struggle when it comes to traveling and making adjustments. While on the road, they have a decent record of 17 wins, 8 losses, and 6 OT losses. However they have a slightly better record at home (at the Verizon Center, which isn’t too far!) which happens to be 27 wins, 6 losses, and 1 OT loss.

Just a couple of days ago, Washington was on a consecutive winning streak at home, winning 15 straight. Unfortunately on Monday, they fell short to the Dallas Stars, who denied them of their 16th straight victory at home. According to NHL.com, when asked about this loss, Coach Barry Trotz said, “I think we’ve got a lot of confidence, but maybe sometimes…too much confidence.”

Sunday, April 9th marks the last game of the 2016-2017 NHL season for Washington. If the Caps can continue to do what they have done on the ice throughout the season, during the playoffs, DC fans have a lot to be excited about.

Although the Capitals do have a history of playoff letdowns, they have proven this season that they will continue to march forward. And with that said, DMV, let’s cheer on our team as they finish the season strong, advance to playoffs, and bring home that Stanley Cup!