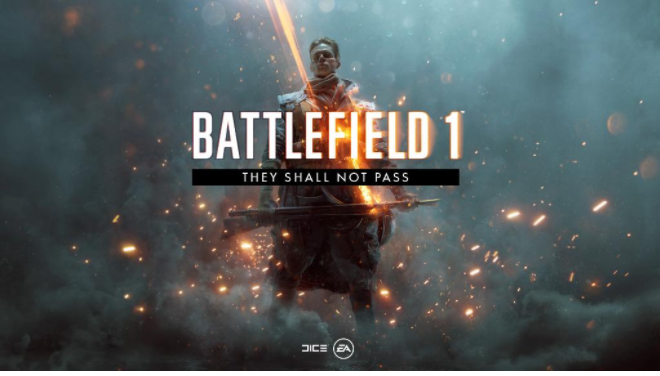 “Ils Ne Passeront Pas” They Shall Not Pass: Battlefield One DLC

Battlefield One is one of the best games I have ever played, and it just got better.

During the Battle of Verdun, the French adopted a new battle cry “Ils Ne Passeront Pas”, “They Shall Not Pass”. The DLC came out a couple days ago for Premium Pass users (Yes, I payed $50 for the Premium Pass and it was worth every penny.) It’ll be publicly released March 28th for $15. What will be included is the whole French Army, four new maps, a new Behemoth, a new tank, New ‘Frontlines’ game mode, and much more. I tried it out and here is my opinion on each addition.

The French Army has been included in their sky blue uniforms.

Verdun Heights- I didn’t play it much, but the designers did quite a good job. There is a mountain (hence why its called Verdun Heights), but it’s not who ever captures the mountain first has the perfect high ground. They did a good job putting cover on the mountain side, making it a contestable area. Also the designers did a fantastic job making the forts contestable and not making it like the forts at “Monte Grappa”. One thing I love about Verdun is it has my favorite WW1 weapon, The Siege Howitzer. It has the power of an Artillery gun but it aims like a Mortar. It’s operated by one infantry player like a field gun. This map was a 9/10 from me.

Soissons (Pronounced Swasson)-  This map is perfect for the new “Frontlines” game mode. I say that because each point is in a small village making it more fun for CQC (Close Quarters Combat) and there is a nice trench on one of the hillsides perfect for flanking or sniping which both are necessary for victory in “Frontlines”. This one was a 9/10 from me.

Rupture– This is one of the prettiest maps I have ever seen. In the middle of the map, there is a field of beautiful poppies. I unfortunately didn’t play much on this map either, but its a nice flat map and you could tell it was made for infantry and tank warfare. An 8/10 from me.

Fort Vaux– Have you ever played Conquest game mode in the Argonne Forest? You know Howitzer Bunker? More commonly know as Point B. If you have played in that point on that map, you know what on earth I’m talking about. Well Fort Vaux is essentially that, but almost everywhere. Don’t worry, the combat zones aren’t impossible to break through. Just intense infantry focused warfare everywhere. I love that mayhem. Gorgeous map. Definitely a 10/10 for me.

New Behemoth- The Char 2C is accurately named a behemoth. Never actually used in WW1 but if it was…This has the health of a behemoth and the maneuverability of a tank. Can turn the tide of a game instantly. This one was a 9/10 from me.

St. Chamond– A new very heavily armored tank with a cool ability: if you’re being overrun by numerous enemies and tanks you can release a pigeon and it’ll call an artillery strike (if you’ve played through mud and blood campaign in Battlefield you know what I’m talking about). I was in this situation, and when I released the pigeon I got six kills and destroyed a tank.

New Elite Class- In the 4 new maps instead of receiving a behemoth in Conquest and Operations the losing team/the attacking team, will receive 4 elite classes including the new one, The Trench Raider. The Trench Raider’s primary weapon is a Spiked Club and secondary is a Revolver. It also comes with a medic crate which you might think will make it OP, but you really will need it. The whole point of the Trench Raider is to get up close and personal. To do that you are going to have to take some hits. You could kill one or two people while they’re firing on you without the crate but you will die if you attack more. Don’t worry, the Trench Raider only comes with 3 grenades that will respawn over time. I thought DICE was gonna give it something crazy like 10 grenades. Definitely a 10/10 for me.

New Game Mode- Frontlines is the best thing about the DLC. It’s a combination of Conquest and Rush and the game can flip at any instant. For example, in my first ever “Frontlines” game I was playing as The German Empire at Fort Vaux and my team was doing pretty good. We captured all the points and destroyed a telegraph, but we ran out of attackers. We were pushed back and the enemy took all the points and destroyed our telegraphs within minutes and we lost. It’s a game mode that you always have to be alert in.

Grenade Spam- That has been a problem with the new DLC. The problem is that grenades respawn 3 times quicker when near an ammo crate! That’s a major problem because it creates a sort of “Argonne Forest” feel in the game, grenades everywhere. DICE has said that they are trying to fix the problem. So if you are a CTE, watch out for a new addition.

Suez- I know what you are thinking, Suez isn’t a DLC map. Yes, that is true but, DICE announced that they want to change the linear feel to it (Thank goodness.). They want to change it because in Suez, you can’t really flank a point and you would have to do frontal attacks which will get you killed easy. There is a Sub reddit which you can put an idea, but I’m going to warn you, DICE doesn’t want to make major changes. Again, CTE’s watch out for something new!

That’s what is in the ‘They Shall Not Pass” DLC.

I rate it a whopping 15/10, yes 15/10. I also recommend that you buy the Premium Pass so you can get the next DLC two weeks early. The next DLC is going to be called “In The Name Of The Tsar” adding the Russian army to the fight. Can’t wait!