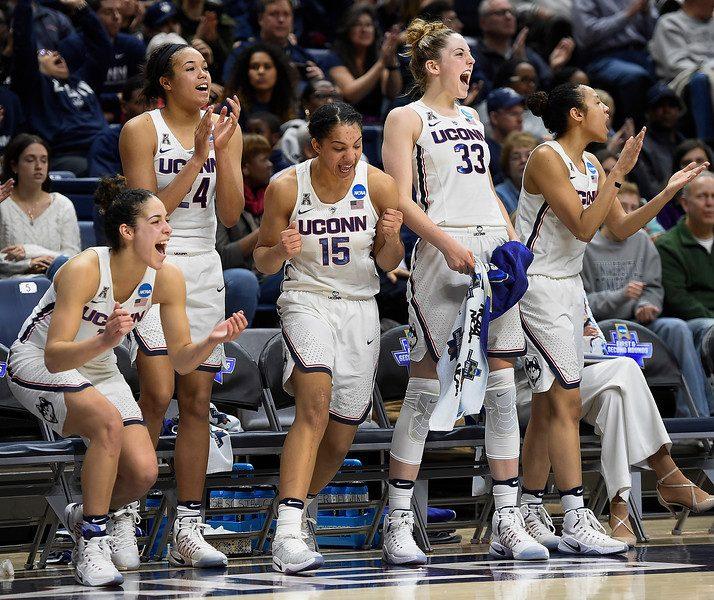 UConn, the reigning champs for four consecutive years now, celebrating one of their many victories.

Why are you sleeping on the women's teams?

With that said, let’s get into the real March Madness, because these ladies are showing out!

Out of 64 teams, 16 have continued to keep winning and leave it all on the court. These teams have made it to the Sweet Sixteen, which is a series of games (taking place tonight and tomorrow!) 4 games will be played on Friday and the other 4 will be played on Saturday. Let’s preview these upcoming games!

#5 Ohio State (28-6) takes on #1 Notre Dame (32-3) at the Rupp Arena in Lexington, Kentucky. For the eighth season in a row, Notre Dame is in the Sweet Sixteen after an overtime win against Purdue 88-82 for their 16th consecutive victory. However, junior guard Kelsey Mitchell averages 22.7 points per game, currently leads the Buckeyes scoring, and will be a force to reckon with tonight.

#3 Washington State (29-5) takes on #2 Mississippi St. (31-4) at the Chesapeake Energy Arena in Oklahoma City, Oklahoma. For Washington; it’s all about senior guard Kelsey Plum, the nation’s leading scorer who averages 31.8 points per game.

#4 Louisville (29-7) takes on #1 Baylor (32-3) in this exciting match-up. Baylor happens to be the second-highest scoring team in the country, averaging 89.4 points per game. Lousiville may be tough to beat though considering their dynamic duo: Asia Durr and Mariya Moore who get buckets every game.

Redemption is in the air tonight when #3 Texas (25-8) takes on #2 Stanford (30-5) after Stanford got the best of Texas in November with a 71-59 win at home. It won’t be another easy win for Stanford though because Texas is currently fifth in the country.

#10 Oregon (22-13) takes on #3 Maryland (32-2) and this is one game you won’t want to miss! Maryland started of the First Round with a huge 101-61 victory over Bucknell. Ever since, Maryland hasn’t lost their groove. Oregon though.. Oregon could pull through and win. What a game this will be.

#4 UCLA (25-8) will be playing the reigning champs,#1 UConn (34-0) which should be interesting. UConn is out here taking care of their business! I mean four years back to back? But if anyone could pull an upset over them, leave it to UCLA.

#12 Quinnipiac (29-6) is taking on #1 South Carolina (29-4) which should be a close game. South Carolina claims that they won’t “sleep” on Quinnipiac and I think that’s smart of them because Quinnipiac might step onto that court ready to ball out.

#3 Florida State (27-6) will be playing #2 Oregon State (31-4) in the final game of the Sweet Sixteen. Hopefully this game will end this round off on a great note.

Good luck to all of these teams as they fight for one goal, that they all share, which is to bring that championship title home.

Now will you continue to sleep on the women’s teams? Or will you witness the real March Madness and all of it’s greatness? #DontSleep #MarchMadness