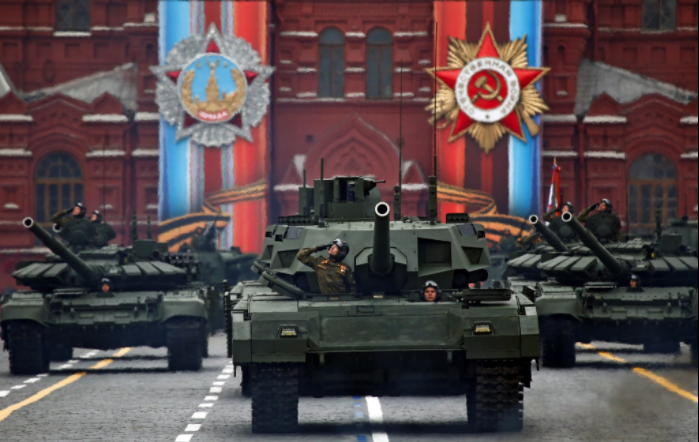 Is Russia Trying To Warn America?

This year’s Victory Day Parade in Moscow had a couple new additions, tanks and armored vehicles in white camo, and most importantly, missiles adapted for Arctic combat. This means one thing.

Now you may think that it doesn’t not mean anything to you as a high school student, but it definitely means something to you if you live in America.

Why would Russia need to develop Arctic bases? One of two reasons.

1. They are expecting an attack in the near future, Putin gives proof of this by saying “No force will be able to dominate our people” at the Victory Day parade.

The only reason Russia would make these bases is for either America or the U.N., which America has a lot of influence on.

2. They are preparing an attack.

At the parade, Putin showed off the Yars RS-24 as one of the missiles. These missiles have an operational range of 11,000km (6,800 Miles), and can reach speeds of up to Mach 20 (20 times the speed of sound), from almost everywhere in the arctic these missiles can be fired and they will reach American soil.

Another odd thing Russia is starting to do in preparation of this “hypothetical” war is instilling nationalism in the youth. This, in my opinion, should happen in America, because if war should come nationalism is necessity. This is something that Germany did in both wars, but they way they did it in the first varies from the second. In the First World War the German Empire (The only nation in that war that had sense in them besides America) knew European war was coming, so they had people conditioned to give up certain rights for their nation during war. They started this as far back as 10 years before the actual war.

America should follow the route of the German Empire in the First World War. If it comes to war (If it does it will be the Third World War) in a wartime government, certain rights will be taken away from us forcefully, so why not do it willingly to help our nation! I’m not trying to say everyone should be ultra nationalistic because that leads to problems, but have some national pride to at least stand during the pledge of allegiance.

In the Second World War, the Nazis literally brainwashed children with Nazi propaganda, these groups of children were called “Hitlerjugend“. We shouldn’t follow this route because then it just teaches young children hate and propaganda.

I also want to add that America isn’t blameless in this hairy relationship with the Russians. I believe the one thing Russia wants the most is respect. Numerous times Russia and Putin have been disrespected or even “bullied” by the other great nations.

1. Obama and John Kerry have both referred to Russia as a “regional power” (Odd thing to say to the only country with more nuclear weapons and warheads then us.) this naturally ticked off every Russian official.

2. At the G20 meeting in Australia in 2014 Putin stepped of his plane and the junior minister greeted him politely, but the much more important person next to him, Australian Attorney-General George Brandis, made no attempt to greet him yet was seen enthusiastically greeting German Chancellor Angela Merkel and Chinese President Xi Jingping.

So is war on the horizon?

I think so, not immediately but maybe 20 or 30 years from now. The only hope is diplomacy. World leaders need to quit acting like high school students and take the safety of the world more seriously than their appearances.