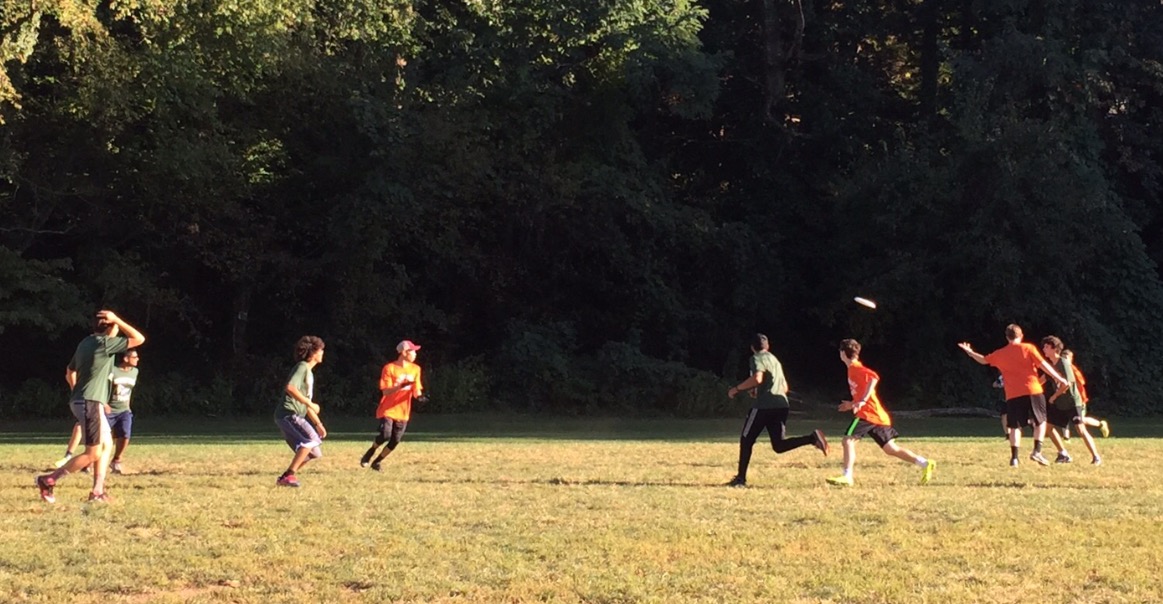 Ultimate Frisbee is the Ultimate Challenge

The Wakefield Boys’ Ultimate Frisbee began its season on Tuesday, September 26th and is looking to improve in their second year as a team. Last year was the first time Ultimate Frisbee was offered at Wakefield, leaving the team behind those at the other Arlington Schools in experience and technical expertise. Despite that, the team fought hard and learned a lot, and hope to win for the first time this season. This year will be about seeing how much they can improve. Sophomore captain Zach Severn said, “We want to improve our skills, have good sportsmanship, and have fun this year.”

Wakefield’s first game was against Washington & Lee, one of their main rivals. They lost, but fought hard and had a lot of fun. The team showed great chemistry and spirit, and has potential to be one of the best in the county. In the second match up against W-L, senior Jaylan Fall caught 5 of the 7 points scored by Wakefield. Quite an improvement over the first game.

Two days later, they played Yorktown, one of the top teams in the county. They fell 11-5, but played very well, battling back from an early 3-0 deficit. At one point, they were tied 5-5 and had momentum. Then Yorktown showed why they are a perennial Arlington County power, and took the lead for good. As Wakefield began to run out of gas, Yorktown began to play harder and scored a string of quick points. Nonetheless, Wakefield showed a huge improvement compared to their first game of the season, and their games against Yorktown last year.

In the game against HB Woodlawn, the boys lost but it was a close call. They matched HB point for point until the very end of the game. The final score was 6-5, but it very easily could have gone the other way.

When asked how this season will be different from last, their coach, veteran English teacher Cliff Brown, said, “I think we’re going to get our first win, but I hope it’s not very different from last year because last year we had fun and played hard.” After watching them in action, it seems likely that they will accomplish those things and more.

The Wakefield Girls’ Ultimate Frisbee team is also entering their second year, and is looking forward to getting better and contending with everyone on their schedule. Like the boys, they are winless so far but enjoying the process. Senior Katherine Buchholtz said, “I think the season is going pretty good so far. We haven’t scored too many points but we’re making progress with defense and offense.” The team doesn’t quit when they get behind and expects to win their first game ever this season.

The girls season has followed a similar trajectory as the boys. They lost to both Washington and Lee and Yorktown, yet improved tremendously in each game. Against HB Woodlawn, the sixth ranked team in the country, they lost, yet had fun and learned from the experience of playing against such a good team. Sophomore Carla Barefoot said, “Even though we didn’t go in with the expectation of winning, I think our team learned a lot from these teams and games.”

Come and support Wakefield Ultimate Frisbee in their next home game against HB Woodlawn on Thursday, October 17th on the Baseball field at 5:30pm. (Boys play first, Girls play second.)