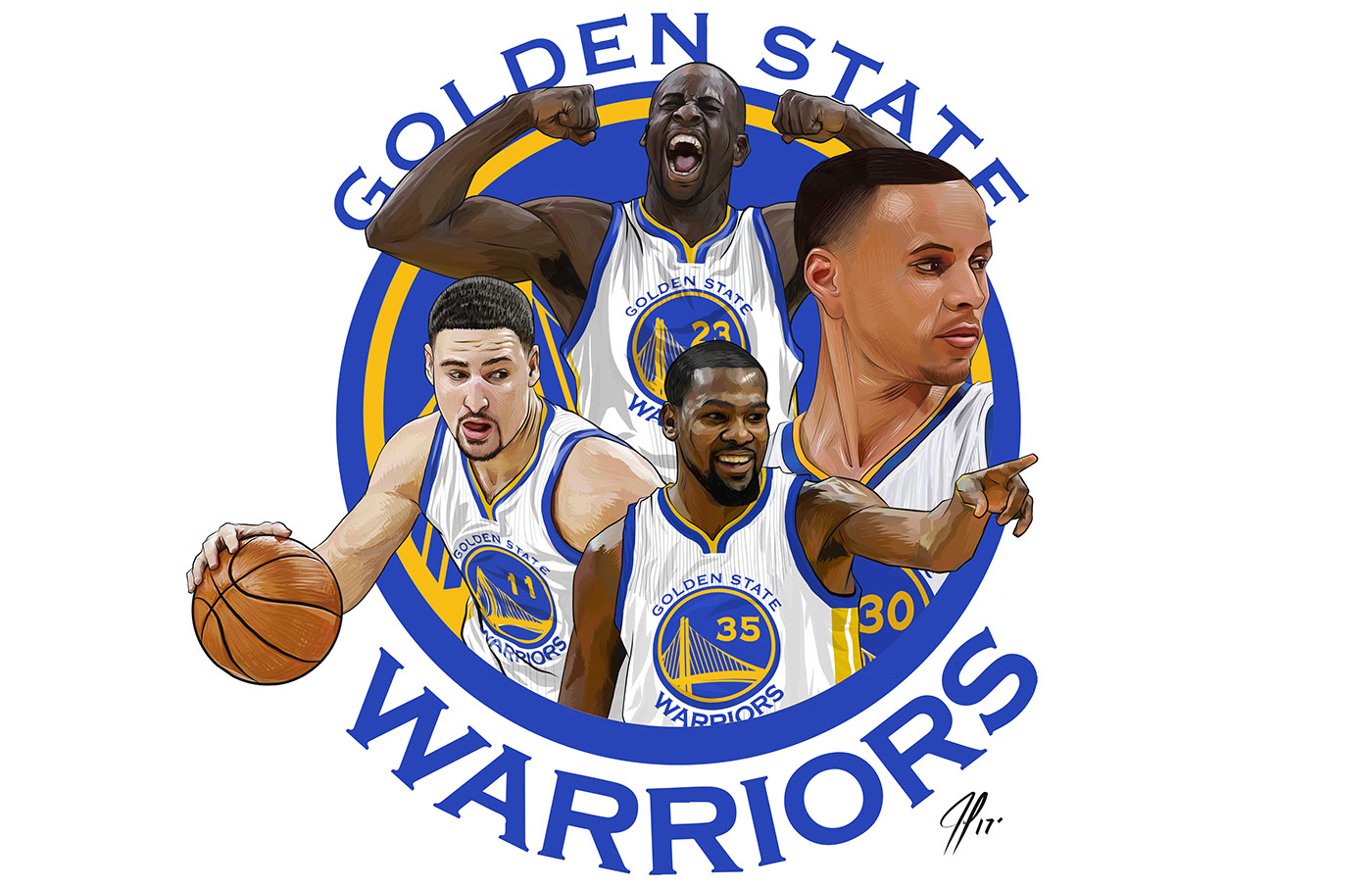 The Warriors will try to keep the Larry O’Brien trophy in the Bay. (Photo found @rob_zilla_iii)

The Warriors will try to keep the Larry O’Brien trophy in the Bay.

Can Anyone Beat the Golden State Warriors?

The NBA season has just begun, and that means that 29 teams are chasing Golden State (again) for the throne. The Warriors kept all of their stars from last year’s dominant team, and added a couple of key bench pieces. Kevin Durant, Steph Curry, Draymond Green, and Klay Thompson go for their 3rd title in 4 years, with a neon green target painted on their back. Here’s the teams that can challenge them for supremacy atop the NBA.

The Rockets traded for Chris Paul to pair with James Harden this offseason, in the hope of increasing their already historically great offensive output. Harden, Paul, Ryan Anderson, Eric Gordon, and Luc Mbah a Moute look to top the Warriors with offensive explosions.

Why They Will Win It All: 3 Point Shooting – Last year, the Rockets led the league in 3 pointers taken last year, and look to continue that pace this season. If they make enough shots, there’s not a team in the league that can beat them. Since the start of last season, the Warriors are 30-0 against the rest of the league when they score 120 or more points, and against the Rockets, they are 1-2.

Why They Can’t Beat The Warriors: Chemistry – No one knows how well Paul and Harden, both players who are used to constantly having the ball in their hands, will react to playing together. We won’t find out for a couple of weeks, because Paul bruised his knee in the season opener. However, in a very small sample size (less than 35 minutes), with Paul and Harden both on the court on opening night, the Rockets were outscored by 20 points. Once Paul left the game, they rallied back to win.

In addition to making one of the biggest trades of the decade with the Celtics, the Cavs picked up Dwyane Wade and Derrick Rose this offseason. They swapped Kyrie Irving for Isaiah Thomas, Jae Crowder, Ante Zizic, and Brooklyn’s 2018 unprotected first round pick. Lebron James looks to pick up his fourth title by beating the Warriors in the fourth straight final in a row contested by these two teams.

Why They Will Win It All: Lebron James – This team lives and dies with Lebron. When James didn’t play over the last three seasons, the Cavs are 4-23. With Lebron on the court, everyone’s stats shoot up. He can play just about any position, evidenced by how he filled in as a point guard against the Bulls, and led the Cavaliers to a win.

Why They Can’t Beat The Warriors: Point Guard – Isaiah Thomas will be out until January, leaving Derrick Rose to fill in. Rose’s play has declined significantly in recent years, stemming from the knee injury he suffered in the 2012 playoffs. James can’t fill in every day, so this will make it a battle to capture the #1 seed in the East, leaving the Cavs tired for the playoffs.

The Thunder added Paul George and Carmelo Anthony in trades to join reigning MVP Russell Westbrook. George’s contract expires after this season, and it seems unlikely that he will resign with the Thunder, so their best chance to win is now. One pressing question for the Thunder: Who will take the final shot? George, Anthony, and Westbrook are all used to shooting the game winner, so whose hands will the ball end up in?

Why They Will Win It All: The Big Three – When you have a three-headed monster the way the Thunder do, you can beat anyone if everything clicks. It will take great games from at least two out of the three stars to beat the Warriors, and probably some unexpected help, but it’s possible for the Thunder to pull out a series win.

Why They Can’t Beat The Warriors: Carmelo Anthony – when the Thunder play the Warriors, Anthony will be matched up against Draymond Green. Anthony’s defensive struggles are well known, but even he will have trouble scoring against the reigning Defensive Player of the Year. This will leave the Thunder will two black holes on offense if he can’t score, Anthony and Andre Roberson, a prolific stopper with no jump shot.

In Game 1 of the 2017 Western Conference Finals the Spurs lead the Warriors by 21 points, and then Kawhi Leonard sprained his ankle. Without Leonard, the Warriors came back to win and easily swept the Spurs. This year the Spurs are counting on LaMarcus Aldridge to bounce back from a rough 2016 to give Leonard some help. San Antonio still has one of the top coaches in the NBA, Gregg Popovich, and tons of experience, so maybe they can turn back the clock to 2014.

Why They Will Win It All: Kawhi Leonard – Leonard is one of the few players in the NBA that excels at every facet of the game. He has won Defensive Player of the Year two out of the last three seasons, is excellent in isolation and can shoot threes. He is the glue that holds this team together, and is a top MVP candidate.

Why They Can’t Beat The Warriors: Age – 4 out of the 5 starters for the Spurs are over 30 years old, and their bench stocked with age as well. Tony Parker and Manu Ginobili have a lot of miles on their odometer, and Pau Gasol is 37. Will the Spurs be able to keep up with the Warriors?

The Bucks have the most athletic, versatile, and rangy team in the NBA. Led by 22 year old Giannis (The Greek Freak) Antetokounmpo, the Bucks are built around length. Antetokounmpo, Malcolm Brogdon, last year’s Rookie of the Year, Thon Maker, a freakishly athletic 7-foot-1 20 year old, and Khris Middleton, make up one of the NBA’s best young cores. The Bucks will be good for years to come, but could also surprise people this year.

Why They Will Win It All: The Greek Freak – Antetokounmpo has already been pegged as a future MVP and the best player to build your team around by GM’s around the league. He is a 6-foot-11, stat stuffing, athlete that can play any position on the court and is a nightmare for any team to defend. Antetokounmpo also leads coach Jason Kidd’s aggressive, swarming defense, and averaged 1.9 blocks, 8.8 rebounds, and 5.4 assists per game last season.

Why They Can’t Beat The Warriors: Jabari Parker – Parker, the #2 pick in the 2014 draft, has torn his left ACL twice in three seasons. He has flashed great scoring ability, but it is unknown how he will recover from two surgeries on the same leg. He is expected to return sometime after the all-star break, possibly in February, but if he can’t play at a high level it will not benefit the team to have him back. Parker is also seeking a max contract extension, and it is unclear whether the Bucks will offer him one because of his recent injury history.

The Wizards have one of the top starting lineups in the league, led by lightning-fast point guard John Wall. He gets most of his help from Bradley Beal and Otto Porter Jr. All three of them recently signed huge extensions, so the Wizards are counting on them to produce and improve. If not, the Wizards will be stuck with good players on huge contracts that can’t lead them to a title.

Why They Will Win It All: The Eastern Conference – This year, 7 out of the top 10 teams in the league are in the Western Conference, leaving the Eastern Conference significantly weaker by comparison. The only teams the Wizards should have a hard time beating to get to the Finals are the Cavaliers and the Bucks. The Boston Celtics were on that short list before Gordon Hayward’s ankle injury.

Why They Can’t Beat The Warriors: Their Bench – The Wizards have one of the weakest benches in the league, and when their starting 5 isn’t on the floor, they can cough up any lead. The development of Kelly Oubre Jr. is important, and the Wizards attempted to shore up their backup point guard spot by trading for Tim Frazier. Their bench is still a huge weakness, and a significant issue for any team that wants to contend for a championship.

This year, no one is good enough to beat the Warriors. The Larry O’Brien trophy will stay in the Bay for at least one more year. The good news for the rest of the NBA is that after this season, the Warriors will have a really tough time keeping all of their superstars, and the rest of the league will have a chance at taking home the hardware. Personally, my money is on the Milwaukee Bucks to be the NBA champions within the next three years.