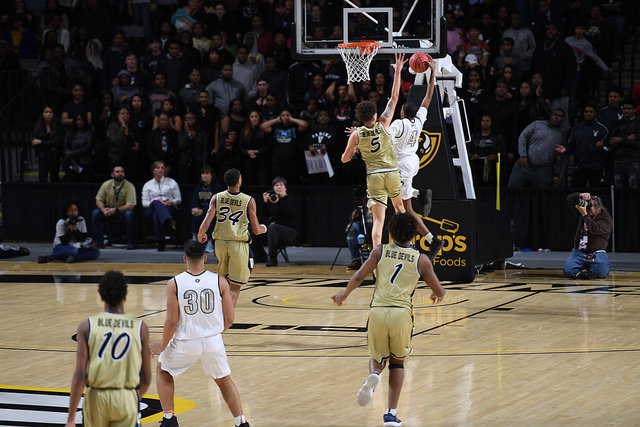 Boys’ Basketball Are State Runners Up

Coming into this season, everyone had their doubts. The great Alan Treakle had left us at point guard, and Halil Parks had graduated from draining those clutch 3 pointers. The team needed leaders, and they found them. Seniors A’Mari Cooper and Ben Horsford stepped into the Captain positions and led this team farther than anyone else has since 1961. Coming into the State Finals with a phenomenal win over Edison (5th time this season) in the semi finals just two days earlier, the Championship was just 32 game minutes away. We lost in the last 6 minutes of the game. The State Championship game may not have gone in our favor, but these boys have made Wakefield and all of Arlington incredibly proud.

First Quarter: Wakefield came out really strong, 15-11 at the end of the first quarter. They were running their sets and sharing the ball really well. Both Horsford and junior Chris Warner knocked down a couple of 3 pointers, Junior Robbie Starkey was being a monster in the paint, and A’Mari was dunking so hard we all thought the rim was coming down.

Second Quarter: Continuing the high scoring game, we went into the locker room up 31-23. The Warriors were putting so much pressure on the Varina Cavaliers; we were getting steals and breakaway layups and dunks. Right before halftime, junior Gabriel Tham stole the ball lobbed it up the court to junior Jared Watkins. Right as the clock was ticking down the final seconds of the half, Watkins went up for a huge dunk, slamming it right in the face of the Varina defender. Wakefield fans erupted with excitement.

Third Quarter: The struggle with Basketball is that a game isn’t over until it’s over. Everyone gets a pep talk at halftime, and then they go back out and continue to play as hard as they can. The third quarter got close, Wakefield was still up at the end but only by 4, leading 46-42. The Varina fans were getting obnoxious, no one wanted to hear them anymore. Our boys kept their heads though, a huge testament to their preparation and focus on the game.

Fourth Quarter: This quarter was for all the marbles. We didn’t have the lead we wanted and then the Cavs got the lead and held it. According to The Washington Post, Coach Bentley said after the game, “‘I’ve been doing this a long time . . . and it’s called momentum,’ Bentley said. ‘Varina did a good job. They seized the moment with the momentum, and it just overwhelmed us a little bit. We still fought, but particularly the momentum was still on their side.'”

We got down by 5 points with 2:54 left, but our boys didn’t stop fighting. The referees had been making questionable calls all game, but we got the worst part when they called a foul at the 3 point line for Cooper as he went to dunk the ball that would have brought it within 1 with 1:30 left. We had the ball and got a quick two points. After a stop in the defense, we were within 1, a very familiar situation to the Regional Championship game. We gave the ball to Cooper to run time off the clock, then he took the ball to the basket. It seemed like a foul, he got hit pretty hard, but the refs didn’t call it.

With just seconds left on the clock, Chris Warner made the right decision in trying to foul to stop the clock, but the refs called it intentional. Every Wakefield fan thought it was a terrible call, every Varina fan thought it was a great call. Who is to say if it was the right call or not, but the Cavs got 2 foul shots and the ball with 10 seconds left. They made both. We stole the ball back and senior Lukas Hatcher went full court and laid the ball in; we were 62-60 with under 5 seconds left. Varina had the ball back and they scored and ran out the clock. The final score was 64-60, Varina.

These boys played a great game and no one should hang their heads. As Principal Dr. Willmore tweeted out minutes after the game was over, “Game didn’t end the way we wanted but could not be prouder of this team. They played hard and represented us well.”  2nd in the State is nothing to shy away from! Next season we will lose our six seniors, but our future is incredibly bright, especially with the way Jared, Robbie, Chris and Gabe played on that Richmond court.

Congrats on a great season, Warriors!

CORRECTION: A previous version of this article misnamed Starkey as the player with the intentional foul. It was returning player, Chris Warner. Apologies, Wakefield.