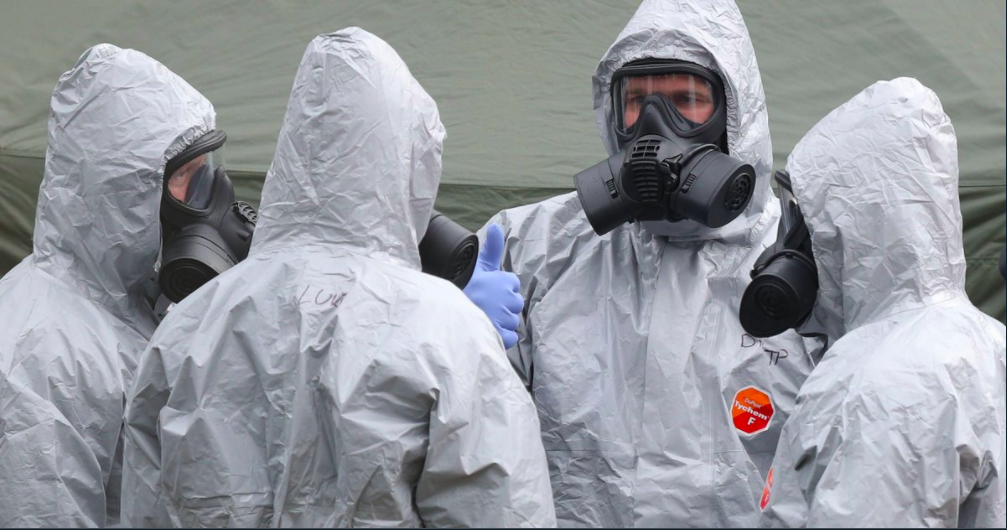 British first responders at the scene with Hazmat suits.

What Is Happening In The World?!?

Attempted assassinations, nukes, an arms race, and increasing tensions. Sounds like it’s straight from a history textbook or James Bond film, right? Well, that is what is currently happening in the political world.

On Sunday, Sergei Skripal, a former Russian Military Security Colonel, turned spy for Britain, and his daughter Yulia collapsed after being exposed to a nerve agent in Salisbury, England. He is considered as a direct target of the Russian state. He was sentenced to 13 years in 2006 by a Russian judge and was released in a trade deal by the Russians, British, and Americans. The rest of Skripal’s family had suffered odd deaths, his neighbors said Skripal’s wife died from a car crash when her death certificate says she died of Endometrial Cancer. Skripal’s son died when he went back to St. Petersburg of “unknown causes”, the family cleaner claims it was liver problems.

UK Foreign Secretary Boris Johnson said if Moscow was found to be involved, Britain would act “robustly”. UK Home Secretary Amber Rudd described this “attack” as “outrageous”. UK Prime Minister Theresa May said, “It is clear that it is a military grade nerve agent of a type that was developed by Russia” and that “it’s highly likely the Russians were behind it.” May gave an ultimatum until March 13 to Russia to explain to them how a Russian chemical weapon ended up being used in Britain. (Update: UK to expel 23 Russian diplomats, Theresa may said the Russians provided “no explanation”.)

The nerve agent that was used has been identified as Novichok. It was first developed by the Soviet Union in the 70s and 80s, it causes respiratory and cardiac arrest (as the victim’s heart and diaphragm muscles no longer function normally) and finally death from heart failure or suffocation as copious fluid secretions fill the victim’s lungs.

On a Russian state-controlled news channel, the news anchor issued, what seemed to be a threat, on live Russian TV. He said, “I have a warning for anyone who dreams of such a career, the profession of a traitor is one of the most dangerous in the world, and few who chosen that, live until a ripe old age.”

Interestingly enough, some say that this attack is actually against Putin, not ordered by him. In an interview with BBC, a Russian exile named Valery Morozov said, this type of attack isn’t Putin’s M.O. (modus operandi), and that in modern, Putin’s Russia there is one rule. “You can have any conflict (with anyone), just do not involve their children.” Skripal’s daughter Yulia is also in critical condition. He also added that this is meant to undermine Putin, who has an election coming up soon, an election that he “actually might lose”.

Looks like we are going back to the Cold War, and not only that points to it, but my next topic of an arms race, and leaders calling each other out point it out even more.

Technically the Cold war ended when the Soviet Union was dissolved, December 26th, 1991. But in recent years, it seems it started back up. Russia and China side together and the United States is by itself with help from Britain, both sides are pushing each other technologically. Just as in the original Cold War (i.e. WMD’s and the Space race).

In the air, even though the United States has complete air superiority, the U.S. has 13,762 of some of the top flying machines with Russia and China together have 6,749. But you have to give it to the Russians, they have made one of the best fighting machines ever created, the Sukhoi SU-35, and they have built it for rather cheap as well. For around 40-65 million dollars per unit, it’s American counterpart the (very controversial) Lockheed Martin F-35 Joint Strike Fighter is around 95-121 million dollars and $60,000 per hour of flight.  It’s said that the U.S. is so secretive about the F-35 that even the U.S.’s closest allies (who invested 4.3 billion into the development!) don’t get access to the software code of the jet (can’t function without it). But they do get to call the U.S. to use it for them. The development alone cost the U.S. 40 billion dollars and the U.S. wants to make around 1000-2000 of them, which will be around 200 billion dollars.

Putin gave his State of the Nation speech on the first of this month and issued a chilling message to the U.S. They debuted two weapons that will send a chill down your back.

The first weapon is “low-flying, difficult-to-spot cruise missile… with a practically unlimited range and an unpredictable flight path, which can bypass lines of interception and is invincible in the face of all existing and future systems of both missile defense and air defense” and can be fitted with nuclear warheads. In the animation that was played many people noticed the similarity of the strike zone of the nukes and Florida. The second weapon was a submarine-launched, long distanced missile also capable of delivering a nuclear warhead. Putin is trying to test U.S. Air defense systems.

Putin later stated that these weapons were a direct response to the U.S.’s development of its Missile Defense System. The U.S. State Department said “certainly unfortunate to have watched the video animation that depicted a nuclear attack on the United States” and it is not “the behavior of a responsible international player”.

The lower US UK-Russian, China relations fall, the closer we may be to the brink of something awful. The longer we wait, the less options we have.