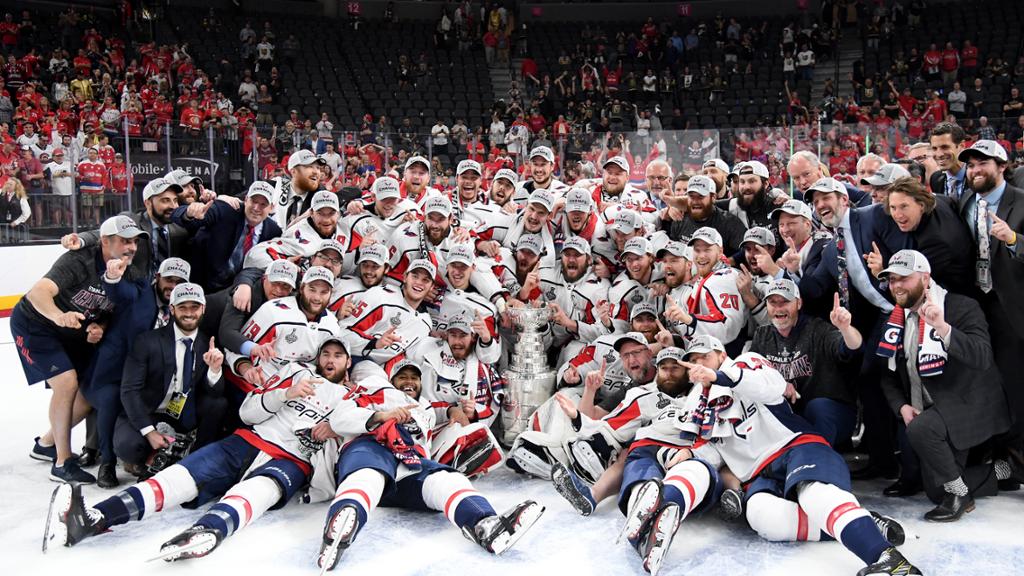 In 1998, the Washington Capitals made it to the Stanley Cup Finals, where they were promptly swept by the Red Wings. In 1992, the Washington Redskins won the Super Bowl under Joe Gibbs. Those were the last times a DC team made it to a championship in any of the 4 major sports (Football, Basketball, Baseball, and Hockey). After over 20 years, the Caps ended ended the curse in spectacular fashion. On the backs of Alex Ovechkin, Braden Holtby, and Evgeny Kuznetsov, the Caps slogged through 4 trying playoff rounds to claim Lord Stanley’s Cup, and relieve the pain induced by all the previous playoff failures by DC sports teams.

The Caps entered the playoffs expected to flame out as usual in the second round after losing several significant players from last year’s Presidents Trophy winning squad, and looked to be headed for an even earlier exit after falling behind the Columbus Blue Jackets two games to none in the first round. Instead, coach Barry Trotz swapped Philipp Grubauer for Holtby in net, and the Caps went on to take the next 4 games to earn a date (again) against the Pittsburgh Penguins in the second round.

This time, they flipped history on its head and got the 800 pound penguin off their back by beating Pittsburgh in 6 games, despite not having Nicklas Backstrom and Tom Wilson, two of their top six forwards, available for much of the series.

They faced off with the heavily favored Tampa Bay Lightning, and shocked the league by taking the first 2 games rather easily. They seemed to be well on their way to the Finals, but the Bolts’ fought back to win the next 3 games, leaving the Caps in a 3-2 hole and considered dead by almost everyone. But Holtby put the team on his back, and orchestrated two consecutive shutouts in Games 6 and 7 to send the Caps to the Stanley Cup Finals against the overachieving expansion franchise Vegas Golden Knights.

After losing a wacky Game 1 where neither team could find a rhythm, the Caps stepped up their effort and proceeded to dominate the pace and neutral zone of the remaining games. During Game 5 in Las Vegas, thousands flooded the streets around Capital One Arena, turning the entire area into one massive blob of red. After Lars Eller scored the go-ahead goal with less than 6 minutes left, the streets of DC exploded. Freshman Sean Borkowski, who was there, said, “It was pandemonium.” Once those 6 minutes had expired in an agonizingly slow manner, the Caps, who had suffered through so many painful playoff debacles at the hands of a variety of inferior teams, had finally clinched the Stanley Cup on their most unexpected attempt.

This playoff run was best symbolized by two players, Alex Ovechkin, the 32-year-old star, and Evgeny Kuznetsov, who emerged as a legitimate superstar during these playoffs.

Ovechkin was all in in a way that he had never been before, diving to block shots and dealing out brutal hits, along with his regularly spectacular offensive contributions. The energy carried over to the rest of the team, and the Caps blocked the most shots out of all the teams during the playoffs. In addition, the gray-haired veteran’s energy carried over to the bench, where he could be seen reacting to each goal and save in such an exaggerated way that he became a GIF. However, The Great 8 still scored goals, delivering 15 this postseason, matching his rival Sidney Crosby’s NHL-best total.

Kuznetsov also delivered a brilliant performance this postseason, finishing with 32 points in 24 games. The Conn Smythe Trophy was won by Ovechkin, but without Kuzy, the Caps would not have made it this far. The 26-year-old Russian has firmly set himself on the short list of NHL superstars, along with his fellow Russian teammate.

Of course, tons of other unheralded players provided clutch performances when the Caps needed them most this postseason. Devante Smith-Pelly has become a cult hero in DC with his 7 goals during the playoffs (matching his 75 game regular season total), including his ridiculous 3rd period game-tying goal in Vegas. John Carlson was a rock on the blue line for a team short on defensemen after losing Nate Schmidt to the Golden Knights in the expansion draft. Everyone on the team deserves mention, all the way down to Nathan Walker, the first Australian to play in the NHL playoffs, but there isn’t enough space here.

The Caps will hold on to the Stanley Cup until next season’s champion is crowned, and each player will get a day to do whatever they want with it. The Caps infamously brought it to a Nats game.

Caps players will pop up many more times over the offseason around DC with the Cup in tow. The Caps have earned the right to celebrate for a couple of months, because after 40 years of missteps, they have finally wiped away DC’s suffering and replaced it with euphoria.

Join them in celebration on Tuesday, June 12th at 11am. The parade rolls down Constitution Ave. Parade route info here.