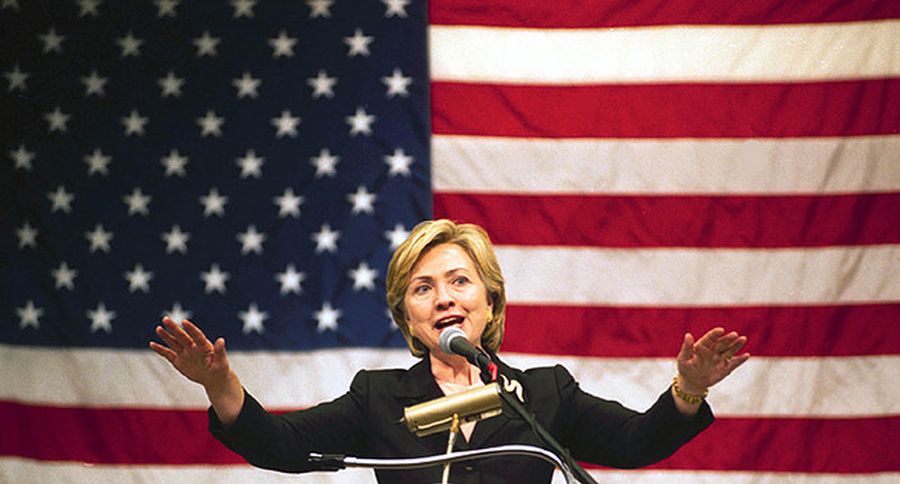 Clinton has a commanding presence at the podium. (Photo by Lauren Victoria Burke/WDCPIX.COM Creative Commons)

Clinton has a commanding presence at the podium.

Hillary Rodham Clinton was born and raised in Chicago, Illinois; she was the first woman to become senator in New York in 2000 and isn’t planning to stop there. Hillary announced her bid for presidency in mid-April. Her campaign, #readyforhillary, has caught the eye of many across the country. She has promised the public a lot in her speeches. She wants everyone to have an equal right of citizenship. She hopes to see a decline in abortion rates. She wants to bring the troops home from Iraq for good. Will these promises be enough to get her elected the first female President of the United States? With no strong Republican contender breaking out of the GOP pack, it might.

During her husband’s 1992 presidential campaign, Hillary Clinton said, “Our lives are a mixture of different roles. Most of us are doing the best we can to find whatever the right balance is . . . For me, that balance is family, work, and service.” She wants people to have the same opportunities she did when she was growing up.

The current Secretary of State explained in another speech about how the stories of women who have gotten abortions has influenced her; their stories have led her to persuade others to speak up, and let their voices be heard. The women she heard from had different stories, but what they all had in common, was that despite all of their challenges, they stood strong. Hillary encourages everyone to stand tall and speak their minds.  “Good family planning and medical care reduce the rate of abortions.” said Clinton. She plans on working to get the abortion rates to zero and believes this can occur by educating young teens, both male and female, on how to prevent teenage pregnancy. Finding common ground is also a goal she plans on working towards with the public on the heated topic of abortion.

Another huge goal of Hillary’s is planning to to end the war in Iraq and bring the troops home. She said that the killing of Bin Laden has strengthened her bond with President Obama. She also said, “you shouldn’t always say everything you think if you’re running for president, because it has consequences across the world.” The country will have to see her plan play out if she is elected.

She already tried to run for president in 2008. When she was eclipsed by Obama, she penned her most quoted line to date; “Although we weren’t able to shatter that highest, hardest glass ceiling this time, thanks to you, it’s got about 18 million cracks in it.”

This Yale graduate and new grandmother has been in the political spotlight for decades. If she wins the race in 2016, it won’t be earth shattering news.